Death and the Shaman 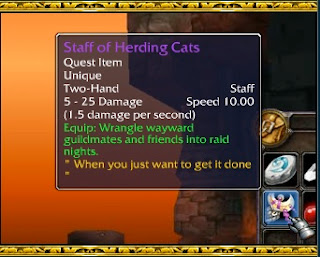 Last night we finished up Deathwing (man, normal mode is sure easy), and tried Ragnaros, again. I know this is kind of frustrating my RL, but as I told him, we have yet to have the same exact group twice in a row. We came close though, damn close. But it's like expecting a playground pick-up game to go to the NBA. When there is a revolving door of personnel, even with good skills, it's tough to keep learning the dance over and over again.

My world right now is chock-full of overwhelming STUFF. I did this to myself. I procrastinated, and others' sense of time and checklists have mocked my own sense of control. I feel for JD, Bear, and my GM for all they have to do in terms of getting everyone to row the boat in the same direction. On top of that, I have many of my own 'cats' to herd now. Too many. And what do I want to do? Go into LFR for the brief hour and a half I have this morning instead of chasing down those metaphorical kitties.

But no time spent in the world or the World goes without something to take away, some nugget of information.

Here are some things I learned:

*Some of my compadres made some [sic] comments about hunter monkeys and other things, but that is the nature of all political debate and propaganda: the lexicon of bias always comes in the form of making something that is human not human. Read George Orwell's Animal Farm as a great allegory.

*I learned that though you cannot slow down the Sons of Flame, they can be stunned by Deathgrip, etc. But I still say just killing them fast is best.

*I think my RL learned that even if a shaman resurrects herself (cough, no, you didn't see that) "she" can still be battle rezzed by another player who has this ability. Coincidentally, saw this post this morning:
http://gooseigaly.wordpress.com/2012/08/09/chat-time-lets-talk-battle-rezzes/

Email ThisBlogThis!Share to TwitterShare to FacebookShare to Pinterest
Labels: Staff of Herding Cats