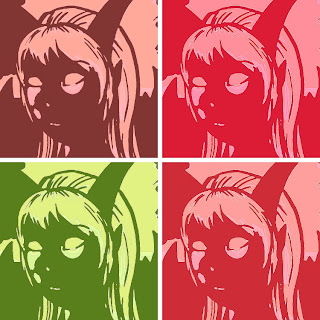 Andy Warhol may not have had this in mind.


Somewhere in that UI of greens, yellows, smoke and mirrors, is a little shaman who was healing and then switched to DPS: Big Bear Butt's Having Fun With Runs

These Sunday night runs are fantastic, and I cannot describe how much I value the new friendships I'm making, and the gentle humor and kindness I have found. This is what I wanted all along, this is the "player experience" I was seeking in the "multi" part. I have had those friendships in terms of partnerships, of which I am still grateful.

Funny, this past Sunday we went in for the "Twice Bitten" one and a few others I had, but wanted to lend my axes to helping all push through, as I know they were helping me. One of my GOs asked the guild to help her go there, too, that same night, so she could finish up one last thing and get her mount. I was kind of bummed, because I wanted to help her, too. I had time after the Sunday run to help her with a few other guild members and some PUG folks to help her with Vile, something I needed as well. I still have two others, but no matter, I will be in the Bear group until all players are on the other side.
It took us a few tries, and at one point, a Val'kyr picked me up, and I said so in Mumble, I thought in my sweet voice, "Oh no, going to be dropped over the edge!" and apparently may have sounded more hysterical than I intended because I was promptly told to "CALM DOWN," by the other GO, her husband. (I laughed actually, cause I went all Dude and abided it all.)

Yes, women love to be told to 'calm down.' But, I'm not his wife or girlfriend, so /shrug. (I'm sure he does not tell her to ever calm down. He is a smart man.) One player's communication is another player's "Over the line, Smokey!" Cause you know, it's a league game. He's a great guy, and it was late, and some of the members of the PUG were being irksome. She got her chieve, got her drake, and that was that. She also got the Reins of the Blazing Drake the other evening too, so cool!

And I apologize for the juxtaposition of these two thoughts: last night while watching the swimming in the Olympics, and Michael Phelps getting his 19th medal, the reporter says to the group of dripping young men after the swim thingy, "Congratulations to all of you for your part in Michael's historic victory..." Okay. I'm looking at the other team members, whose names I do not know, whose parents are also in the stands, who spent countless hours by cold swimming pools turning their sons into dolphins, and thinking, "Gee, would have been nice to acknowledge them, too."

I guess my point is, when you take the time to rally the troops to help you out, and there's only one piece of cake for ten or twenty-five players, and the cake is yours, remember to say "Thank you." Recognize that no one gets the gold on their own. The classiest act last night were the girls' gymnastics team, and if they said it once, they said it every sentence, "Team USA."

So, Bear: TeamBear ROCKS. When we are all standing there with our gold-medal mounts, it will be because of your humor and kindness, and your family and friends.
Posted by Matty at 8:36 AM

Email ThisBlogThis!Share to TwitterShare to FacebookShare to Pinterest
Labels: Big Bear Butt is the Greatest Blogger Ever, league game