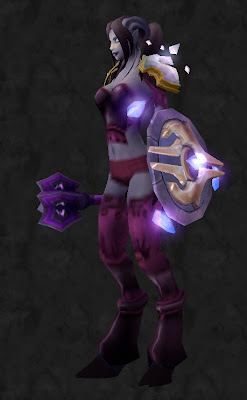 The other night, just hanging out, Luperci got called off the bench to tank. (Stomach clutch!) I have all kinds of excuses, but excuses they are indeed: I am just not prepared to tank. I leveled her solely as a protection paladin from the get-go, only recently sneaking into LFRs as a healer (she has the gear -- relax, ragers) and to see what that is like. I just couldn't seem to get the hang of retribution, all spinny-crazy-zealotry and blasting out demons stuff.

I have almost zero experience raiding with Lupe. Let's just say, that during one fight, the RL said, very nicely, and in no way critical, he didn't have time to teach me to deal with this finicky boss or fight mechanics, but he wished he did. And, a few weeks ago, my GM mentioned how much he would like to help train a tank, and I wish he did have time. Luperci (caution: going into third-person detached from self mode) could be a good tank, heck, maybe even a great one. But as time goes by, I see this character, along with my hunter, sliding further and further down the bench. I was also thinking that learning how to play in Azeorth is just as much of a journey as why. But then there is the 'what.'

But the question is: Can I be, and do I want to be?

In truth, it was Navi's post that sparked my thoughts back again to tanking. http://frostwolves.blogspot.com/2012/08/transitioning-from-healer-to-tank.html

There are some players who seem to know everything about every character and every build and every spell, and are free to share their "insights" with you at every move. I remember the story I told of my role as the Christmas Fairy when I knew everyone else's lines. I was six or seven, after all, and a complete expert. But I don't want the advice from players who have been in the stands, I need true experts. Not generic elementary school teachers: I need a niche professor.

I don't play Lupe that much--but I want to. I think. I do. Really. But it is the Gladstone's 10,000 hours again. You all probably don't remember what it was like to learn how to drive a car, or tie your shoes even, or become potty trained--I mean, how far back can I go, to what is effortless to you now? I know what I am supposed to do to keep aggro, or heal myself, or gather monsters and mobs. But those bubbles aren't totally second nature to me, and for a protection paladin that's kind of like saying you're a fisherman but aren't sure which end of the pole the bait goes on. It is an integral part of the class.

Just had a conversation today about my status in WoW, or lack thereof. I told this young leet it wasn't about being the "world's best" but I still had a right to enjoy playing. Just because I'm not getting a gold medal doesn't mean I can't swim or ride a bike. Some people see the world in very contrasting shades, but I'm still sliding along with greys (no, not fifty).

Lupe is at the point where I have plateaued on my ability to increase knowledge without further help. So, gentlemen: Your assistance please. When you have time.