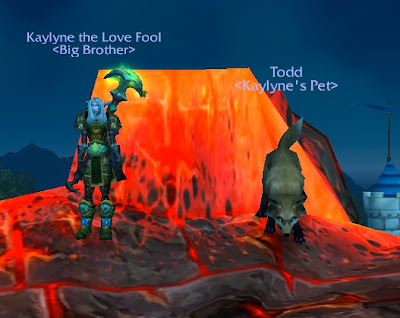 This world can get quite lonely at times, and although some of you might like the option to solo your quests and achievements, I am not that way. I enjoy the company of a friend. Whether I am killing spiders in Tol Barad, or tying one more time to get through Heroic Grim Batol; a companion to stand by your side is nice to have. To give encouraging words, share tips, or just enjoy a laugh together about how the tank is such a noob. But often times I find myself with nobody to run with. It makes it quite lonely and I find myself sitting in Stormwind, constantly spamming “O” to see if I just happened to miss someone come online. Now this may sound needy, but so be it. This night elf likes her friends.
Luckily though, I am never completely alone. I always have someone close at hand. Someone that comes swiftly with just the sound of my whistle, eager to please. He’s always there; ready to charge into whatever unfamiliar territory I happen to have drug us through that day. He has always been there fighting fearlessly beside me during every battle. I can always count on him more so than any other player I have come in contact with.
You may be reading this trying to put a face or a name with this description, but it will be in vain. This post isn’t about you. His face is easily recognizable and you might even think that you know him as well as I do. You might think that he fights next to you every day as well, but don’t be mistaken. He is MY man! You might be talking about his brother, or uncle, or cousin. I’m talking about Todd. My Todd, and there is only one of him. In my very unbiased (*wink*) opinion he is the best fox in all of Azeroth.
He is the first one to jump in the fight to draw the attention to himself, while I quietly shoot them from behind, but I am continuously giving him love to keep his health topped off. When our teamwork gets an opponent down, he runs quickly back to my side to make sure no one else messes with me. He is the ultimate body guard.
As much as I count on him, I would like to think that he kinda needs me too. He always dashes back to my side knowing that tucked away in one of my embersilk bags, I have a treat with his name on it. I always reward him for his valiant efforts and mend any wounds that he might have acquired.
He can be quite scatter-brained at times though and go off chasing a random squirrel 50 yards away, or the occasional bug in a dungeon, returning with a mob of angry people right on his heels. It doesn’t bother me quite as much when I am questing solo (because of my 2 amazing CCs that help) but in a dungeon it can be very detrimental to the entire group. I am always willing to stick up for him even though the “WTF Kay” and the “BAD FOX!” Let me put your mind at ease: Yes he is on defensive and yes he is on cower. But Todd is just Todd and he is going to do that from time to time. It’s his instincts as a fox.  He sees a bug, he will chase it. When I see him taking off across the dungeon, I can do nothing but hold my breath and hope he doesn’t bring anyone back with him.
In spite of everything, I wouldn’t want to travel this land without him. The good greatly outweighs the bad. Yeah, I would say we make a pretty good team. You could even say that “we are the best of friends!” I can’t help but hum a familiar tune.
--Kay
Posted by Matty at 3:15 PM