I am not a gamer, but know plenty of them. Was in a Gamestop the other day, and was strongly, STRONGLY cautioned against Demon's Souls. Every clerk in there, every young man under the age of 25, in their best Comic Book Guy voices, warned me that a purchase of this game, new, would be folly. I was encouraged to purchase it used, because I would come whimpering back, receipt in hand, to return it, crushed under its complicated machinations and the sheer confusion, reeking of defeat and humiliation.

This is not a game for sissies.

But it is beautiful.

On occasion, I do wish sometimes Azeroth wasn't so cartoonish. I understand the weight of a nation-sized world of 12,000,000 is a lot of pixels to manage, but if I could play a character who was more three-dimensional, more cinematic, that would be sho kewl.

Another game I find sublime and breathtaking is Limbo. Witnessing the weak deaths of the main character is depressing and more than a little emo. It is tragically delicious, though. 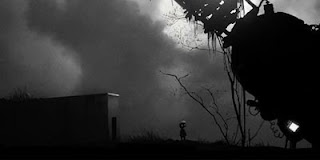 So if the palette of Azeroth gets a little too bright, I suggest you turn down the lights and noise, and try one of these other games. If nothing else, the birds are angry enough, and Diablo III is still a few weeks away.
Posted by Matty at 2:16 PM