Since the time I have been playing, about a year and a half, three players have reported seeing other draeneis, shamans no less, who resemble "Matty." One even said he had to rub his eyes to make sure it wasn't me.

Well, as I was walking down the street, doing my jewelcrafting daily, I see this girl:

Not only does she look like me, but my Hyjal bear cub didn't even recognize me, and sat right next to her and her stinky little butt-wiping dog! Oh! The nerve! Like to rip her bleach-blond hair right out from the tender roots!

Which leads me to my point:
Draenei girl haircuts = not good. They are some left over from Farah Fawcett's heyday of feathered bangs and big poofs. Luperci has had her hair cut no less than approximately 45 times. She has tried blond, long,  straight, up, and every time ends up in the same pigtails. Matty's hair hasn't changed except for once. (And now this trollop comes waltzing down the Whisperwind streets...! Shammy RAGE!)

I have been told, repeatedly, in a nerd-tastic tone, that hair pixels are tough to model. And just like the hairdresser we love, when we bring in a photo of Jennifer Anniston or Selma Hayak and say "Cut it like that," what we're really saying is, "...and I'll take a side of plastic surgery too to look like her." It is the magic. I know -- men will never, ever understand this. I get it. The only man who understood good hair is Samson, and look what happened to him.

Now Night Elf females are given many more choices: they can have the Fook Yu or Fook Mi look: 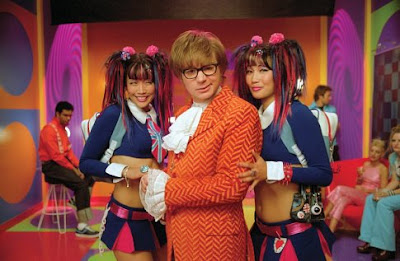 Or really, really unattractive, like Sinead O'Connor shaved. Or soccer-mom-ish.

It would be too much to ask if the Transmorgifierblahdeblahhoopdejoo thing provided more hair style choices, I know.

And while crawling over the web today, found this gem:

It wasn't just me who was irked by the World of Dresscraft comment:
http://manalicious.wordpress.com/2011/08/26/still-excited-to-play-world-of-dresscraft/

Just talking about that today with some Druids by the water cooler!

And I do appreciate Manalicious' artwork. She is incredibly talented. I can't help but wonder, though, how Arthur Rakham would have drawn a Draenei female. One can only imagine.

Postcript: Things that do kind of, a little bit, maybe, just a tad irk me: When players tout that they "have boobs!" Okay, sweetie - 40% of us do who play WoW. That may impress the wanker down the block, but not sure that one is a buff anymore. What does that have to do with haircuts? Not much, but if you're trying to impress anyone with your feminine wiles, well....

*"Trouble" is the name of my toon's haircut. Oh yeah. You copy my groove, there's gonna be trouble all right.

Theme song: Cake/Short Skirt/Long Jacket (Lou Reed, is that you?)
Posted by Matty at 8:21 PM