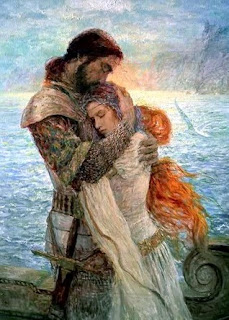 I am sitting here thinking, as the coffee is brewing, about stuff. Too much stuff. I would love nothing more than to drink the coffee, and then go back to sleep, with the Northwestern spring rain encouraging the birds and bees to get busy, and then go about things on this Friday at my pace. I would like to go into LFR and obtain a better weapon for Ceniza, I would love to peruse and study the scrolls and meditate on how to produce a powerful fire mage, seek vengeance on the Lich King, and write a few more chapters to my short story.

BRB - coffee just beeped that it's ready.
<Away>

So, let me kick to the curb my dream goblins first:


Effy's post on chivalry got us all thinking, and here is my response:

Effy's post links to O's post, which I am not going to link (you'll have to click yourself) because the thing is, I am not sure it needs much more publicity. O is correct, context means nearly everything. I say nearly, because I wonder if the image in question was of say, a Mexican in a big sombrero taking a nap under a cactus, or an African-American eating a watermelon, but it was in historical context, how much it matters? I guess I just answered my own question. If the image was in a history tome explaining racial bigotry images versus an actual poster on a stereotype, then sure. But my emotional side, and this again is where opinion resides, is I cannot help but be reminded of a very good friend who left an abusive relationship, and what her response to the image might be. The image is what it is; one's interpretation is a whole 'nother issue. I will never ask her. I don't want to remind her of any pain.

We have most assuredly lost our critical thinking skills when it comes to fact versus opinion. Blame the media whose mission is to create a veil of facts when really, it's just like your opinion, man.

The image in question, in my opinion, does not show that the female is "clearly casting a spell"-- nope. The image could have been drawn many different ways, but it wasn't. That is a fact. It is drawn the way it is. Now, what conclusions or context one draws from it, that's where the trouble begins. One man's door-holding is another crazy girl's edict on Nazi feminism. Say what you will about the tenets of tenets of national socialism, but at least it's an ethos.

And as far as Blizz changing the panda's dialogue? Well, my knee-jerk reaction is 'big deal.' Writers edit things all the time. I think what they came up with is better. Just because readers got to see behind the curtain before the final show, well, gee. I don't know. Think about it. What if you got to read all of the best novels before they were edited? What if Margaret Mitchell made Scarlet and Rhett live happily ever after? What is the prince never does find Cinderella, and one of the step-sisters ends up with him? What if in Carrie Stephen King gave her a hot shower and fresh corsage? I guess what I am saying is dear fellow players, don't break your hands patting yourselves too much on the back for changes you like, affected, hate, or whatever. Freedom to critique rocks, and that is the fun part, isn't it?

The thing is, and this is anecdotally what I know and have discussed, once we all separate out our emotions from any topic and sift out fact versus opinion, we are left with our biases, and we want our biases to be truth, to be fact. And there is wisdom in our perceptions are our truths.

One thing for me is I know if I start to get discouraged, disheartened, or depressed, I will try to stay away from the news. The never-ending stream of human atrocities grinds down our spirits. Part of my sheer, unadulterated joy has been meeting great friends and being treated like a lady in Azeroth, chivalry to chauvinism. Yes, even the chauvinism, because it's laughable, and makes the chivalry all the sweeter. The relationships, the friendships, supersede gender, race, and other obstacles to their purest, sweetest rewards--just hanging out with cool people.  I need to check myself and perhaps not steer toward links and blogs that become too newsy, because really, the real world has dragons enough, and they are not metaphorical.

So, back to my little stories. Back to my quests.

And to my friends.