Inspired by Nacholibre, el luchador, I am in the process of creating a series of some of my favorite Hollywood characters. Cymre has the fairy tales fairly covered, beautifully I might add.  (See Postscript)

So, based on Margeret Mead's Gone With the Wind, you are all going to want to weigh in on racism, the south, and mean red-heads (Scarlet was originally a red-head in the novel) and matriarchal archetypes associated with race, gender, and contextual societal norms. I get it. But sometimes a good heroine, (she really is an anti-hero, and so is Rhett) is just that. Consider the times. Scarlet is the quintessential transformation of hero, but ultimately the themes of "too little too late" may be true for our nation. Well, maybe you won't. Maybe you'll just admire or critique my transmog effort.

Set the scene: Scarlet is down on her luck. Her mother, the saint of the family, has died, having caught typhoid or something from that no-good slattern, not coincidentally named Emmy Slattery, and her father has gone mad with grief and the war. Rhett Butler, an opportunist is in jail for something about gold or smuggling or something, and she visits him to get a loan disguised as his sister. Since she has nothing to wear but the dirty, ripped clothes, former glorious dresses destroyed by working in the fields (oh, well, Scarlet) she resourcefully rips the green velvet curtains off their rods and creates a stunning, albeit shady, dress: 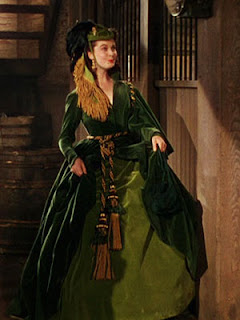 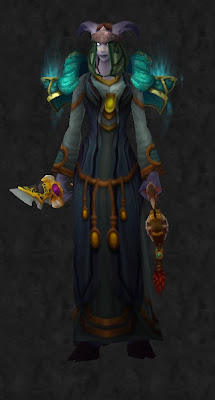 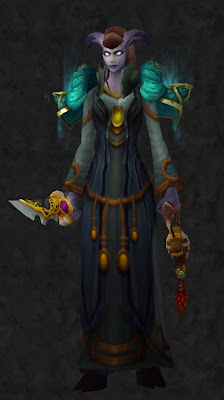 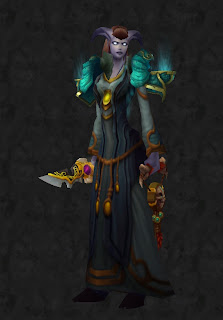 It's not quite right, but I added the dagger because a lady always has small blade in case someone needs cutting, and she's quite adept at stabbing loyal friends in the back. The off-hand looks kind of like a small hand-bag she may have carried. Skull insignia extra bonus. I tried to create a Rhett Butler, alas, have no male Draeneis at the level to put in a suit and cheesy mustache. (He grumbled something about not giving a damn, so I let him be.)

Big Bear has a wonderful compendium post on blogging in case you missed it (doubtful): http://thebigbearbutt.com/2012/04/06/mise-en-place-makes-mogging-my-leveling-joie-de-vivre/

Postscript: If you can come up with better, please! I bow to my transmog gurus like Effy and Cymre.
Posted by Matty at 5:50 AM