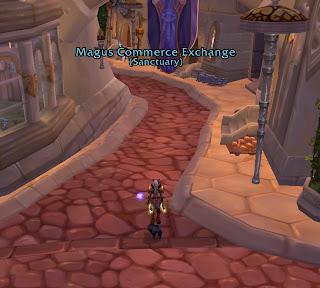 This is why I hate the Kirin Tor.

My two-year anniversary of creating Mataoka is coming up May 1. Not sure what is appropriate for the two-year mark: is it the linens anniversary or new mount? So hard to know. But for the bulk of this time, I have been grinding away at the Kirin Tor reputation. I am bars away from exalted, still. I wear the tabard full-time now:

I go see that pimp, Timothy Jones, and his hoodlum pals Tiffany and Harry (both allusions to famous jewelers, including the name of the place, Cartier's) and have done more dailies for him that I care to count. Cut, clarity, color, and carats have become to taste like ash.

I know the Kirin Tor are responsible for something or other in Dalaran, magic, and a lot of purple. And I was never trying to be exalted with them for their gear--just out of sheer stubborness now. They don't have a mount, they're not going to give me diamonds, and they sure as hell aren't going to give me one of their 7K gold rings so I can pop back into Dalaran at the twist of a gem. Maybe I'll just do a marathan lower-level dungeon day and wear that ugly, phallic thing until they finally say, "You're one of us, Matty."