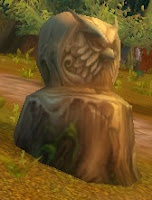 This is my metaphorical junk drawer, where I'll be keeping some of the bits, bobs, and doohickeys I don't know what else to do with: I might need "it" someday!

Hit and Run:
If you follow the Big Bear Butt, you've read his post about a character/player named Dalra who intentionally, purposefully, and maniacally ruined an experience in LFR. He was the "Mr. Anderson" in the Matrix: dogged, and detrimental. Some felt Bear may have been justified in his writings, some may have felt he veered towards the side of vigilantism. However you may feel, he brought up a something that is fundamentally at the heart of the issue of other players/human ruining anything for us intentionally: just because it is a "game" doesn't mean the anger and rage isn't real. I was reading on Facebook the other day about an acquaintance whose car was hit, mangled, and then left, no note, nothing. This sh*t happens all the time. And though in Azeroth, one's insurance premiums won't go up, but the player did waste what cannot be recovered: time. And that is a big deal.

Music to my ears:
The centennial of the sinking of the unsinkable has been widely reported of late. One story that has stuck in my head/heart is the story of the bandleader, Wallace Hartley. That last song, whether it was or not, is haunting. I know I'm a dork, but sometimes, when I can and it won't bother others, I turn the soundtrack on in Azeroth- there are tunes and refrains that immerse me 'in game.' The talented composers and musicians of this world cannot be lauded enough.

Letters:
I love letters in game. Every time I see that I have a letter that is not from the Auction House (a bill) or one of my characters (a metophorical sticky note to myself to "do something") it is a treat. I have saved all the funny and sweet ones--worth every bag slot.

That Would Be Sho Kewl Idea:
Heretical concept, I know, but what if...what if we could do a quest or had a narrative where our characters could acquire a spell or trait of another class? I'm thinking specifically of mixing up paladins and Death Knights. Luperci is in crisis, and needs to find her way back...

Speaking of paladins: last night all I could manage was a vegetative state on the couch. I thought I could sit there with my eyes closed and level Momo. I fell in with a paladin and a hunter, and we ran one, then another, then another -- I declared a "leveling festival" and the three of us, with some changes in personnel, leveled four levels last night. The paladin gave out his Real ID email, which I have but did not take advantage of--still cautious of that. But he called me "mate" a lot, and was great fun. I did all this in level 15 boots. Yup. Bad shoes, but he was such a gentleman, checked on my mana, "mate," and we had a great time.