This may be the most irrational thing I have admitted, and for those of you who love Bambi, bluebirds, and buttercups, you may want to back up, leave quietly, and pretend you were never here. I confessed to cross-dressing rogue yesterday that I despise Little Noah. 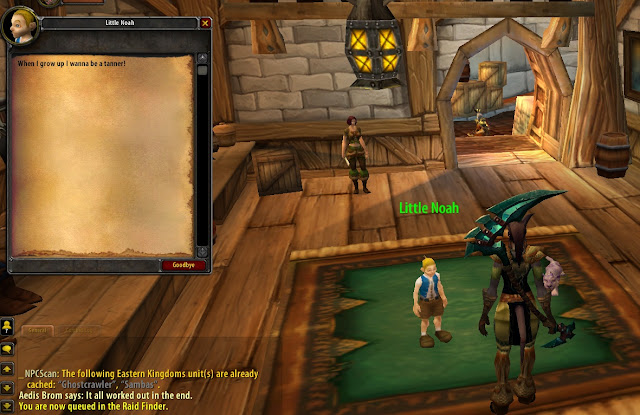 Little Noah who is bored out of his skull, is out of Ritalin, and is trapped forever in an endless jittery, hyper rounds in his parents' leatherworking shop in Stormwind. I have literally avoided going in the leather shop because of him. I want him to stop. Just stop. Stop, Noah. Stop. Or go play in traffic! Or, go outside, do something! Get out from under my hooves!! CDR thought it was a sign of my normal world, but no, it has everything to do with really not liking children all that much. And I mean "chilllldrain," not kids, not babies, not even teenagers or young adults: those in other age brackets younger than I fascinate and delight me - I see their potential and it's great. But "chillldrain" like our young Master Noah here, just annoy me. But I blame his parents. While Maris Granger looks on, his parents seem to be too distant from any contact with him, or of any help. To them, perhaps they regret that night in the Ironforge pubs that resulted in his creation.

Lurking around Facebook yesterday I saw the most smarmy post by a young lady about the bellies on some belly-dancers in a parade. Really? All dancers need to look like anoxeric meth addicts with booty shorts to be considered acceptable? One young lady even went as far to say it made her feel better about herself.

This is summer vacation in the States for my southern hemisphere pals, and it is frought with bored teenagers and young kids. With a 50% divorce rate, and many single parents out there, or both parents holding down jobs, it's a tough balance to keep kids safe and occupied. I admit to being so bored when I was a kid-- the rare times we lived near a pool were glorious, otherwise I was busy babysitting or reading. Now kids have this Internet thingy and they are apparently in Trade Chat trolling out of sheer boredom. Or on Facebook touting their false self-esteems. We adults who are on playing at our odd-hours, or when we can, and do not have anyone giving us a curfew, get a little perplexed at the quality or decline of players this time of year. There are more kids on, who should be outside getting mosquito bites and freckles, but are getting their computer-screen tan because the sun is dangerous, and there are creepy people out there. Not like the Internet where there are no creeps.

If I could, I guess, I would take Little Noah to the park, or introduce him to some of the ruffians in Goldshire, or something. Give that kid a lemonade stand, for heaven's sake--- something but get him out of that damn shop. He's making me nuts.

Email ThisBlogThis!Share to TwitterShare to FacebookShare to Pinterest
Labels: NPC that drive us crazy