Know Your Archetype: The Warrior

Disclaimer: These are archetypes--if you play a warrior, and are one of the "good guys" (I am thinking about Vidyala's husband who plays a warrior), then you have surpassed the expectations and broken free of the typecasting. My player friend who has many DPS characters is a good guy, too, and I don't consider him in this broad brushstroke I'm about to lay down.

Many warriors I have encountered, however, are not so noble.

Warriors live and die by the sword: they rarely become seasoned veterans or heroes. They just don't live that long--they are brash, cocky, impulsive on good days, and vain brigands on bad days.

The warrior lives to fight, and by nature is aggressive and confrontational. I have a very small data pool to draw from when judging warrior personalities in game, so my analysis may be faulty; however, they are usually packaged as a warrior/warrior tank, retribution paladins, and Death Knights. They are the mercenaries of the world, and use their single-focused goals to their own ends, both their ends in terms of the fame and glory they seek, and ends as their deaths. Two warriors I have known in game behave much like Ser Corbray below:

From A Feast for Crows:

Spoiler alert: if you haven't read this book yet, scroll down. But I'll try not to give too much away. Let's just say a beautiful young girl, age thirteen, is serving a roomful of guests, and the warrior says something crass, and the older noble lady chides him. He doesn't care: 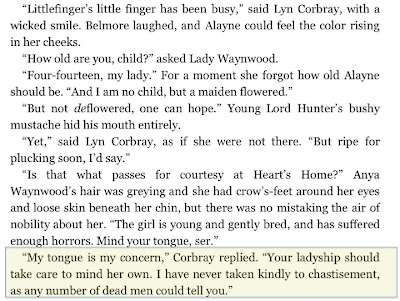 Warriors tend to be threatening, and when there are not enough monsters to slay, they will turn on you, their own teammates. They are the bullies, the punks, the pendejos, who think they can do no wrong, and do not take criticism well--in fact, they don't take it at all. They are deaf to others' assistance or insight, and the chip on their shoulder and their own internal shortcomings would elicit empathy if they weren't so bloody braggadocios. Now, this begs the question, why do we need the warrior archetype?

I would say the reason should be obvious: children, and generally boys, need a purpose, they need challenging, physical play and plenty of room. Parents laugh when they try to have a more "gentle" boy, give him a doll, and he turns it into a gun. Didn't know you had ballistics-grade accessories, did you Malibu Barbie? Many studies have been done to show that video games are the replacement for boys' physical energy-releasers. I have known some young punks, and once I have given them a physical, meaningful, and helpful task, they are sweet as can be. Young men need a reason to fight, to defend, and fighting for one's selfish purpose isn't enough to make a man out of them, sorry to say.

This does not mean women aren't strong warriors, though, not at all. But usually the females warriors, (again, stress usually) have some other meta-maternal or care giving side to their motivations. If you like it, you better put a ringmail on it.

Consider Brienne in Game of Thrones--horse-toothed, Amazonian in size, and in her heart, desperate. Joan of Arc fought because God told her to.

One of the most tragic realities of our times is the boy soldier, used, enslaved, a pawn for others' greed and mercenary motivations. It is truly heartbreaking.  There is another sad reality, too, and that is nations who behave as the warrior archetype, when the hawks beat the doves. I have many conflicted feelings about this, and won't go into them here. I do honor veterans who serve my country, and fight to defend, and as a citizen, always do my utmost to respect and protect those who serve, and never ask them to fight for unjust reasons. It's defining the "unjust" where every first-world nation gets in hot water, not just the United States. I guess I just wish our "village elders" were more wise shamans than avaricious goblins.

There is a reason why drums are used to rally the troops--the beat gets in our very souls, our blood pumping, until we only see bloodlust and the single-focus will to attack.

*All war songs are musical propaganda.
Posted by Matty at 8:40 AM