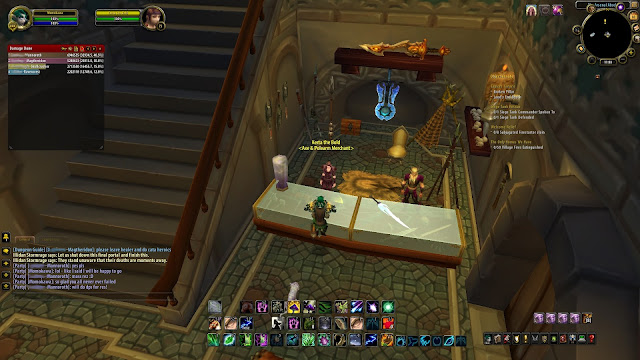 Momokawa needs a healing mace. What had dropped hundreds, it seems, of times for Zep, Matty, etc., never drops for Momo. If I am with a good group, doing good DPS, healing any and all current dungeons has not remotely been an issue. I saw that this group was in trouble the second the tank had the highest DPS/damage in Well of Eternity. The warrior stepped it up, but even at first I told them I would gladly go if they got in trouble again. After a wipe on trash, the tough trash before the horned devil satyr boss guy, before I even got a chance to say, "Okay, have a nice day," I got "FAIL HEALS."


So, yes, this made me a bit cranky on an already cranky spirit. I'm worried about some stuff (it happens from time to time, have a mighty worry gene that sometimes kicks in on overtime), and I just....want...that....damn....mace. Why?


Cause it's fun to throw leaves around.
It's fun to hear "whoooosh!"
It's fun to have green, or blue, or teal, or purple, or silver hair and face markings of a pretend tribe.
It's fun to wear feathers and leather and claws.
It's even fun to have man-hands and long ears.


I have horrible gear on this druid, and know I am scraping by on a wing and a prayer with this one. I was seriously thinking about finding the tank I wrote of several weeks ago who was so chivalrous - perhaps Momokawa should look him in her little black book and change realms, the one who told her what her name meant. But--no. That would be weird. If Momo was just a character, sure, but those humans misunderstand friendships sometimes. They think the wrong things, or make awkward assumptions.


But little boy mages and girl rogues...watch out. I might get that mace and smack you over the head with it.


Dear readers, I do have a better, another grand story to tell, but it's in my mind right now, from an event that transpired yesterday. Be patient. Going to make myself some tea and read. Gotta get the crankies off of me.

Email ThisBlogThis!Share to TwitterShare to FacebookShare to Pinterest
Labels: Momokawa