In my little corner of the real world, thunderstorms are cracking and deluging the humans and weasels alike. The weather patterns contrast greatly from the great plains of the States, for in the Pacific Northwest, buffeted by various mountain ranges and oceans, rain is common, but the necessary heat to produce thunderstorms is not. Large cumulonimbus castles of clouds are not part of the tropospheric architecture. And while thunderstorms cause many anxiety; dogs, cats, and humans alike, I enjoy them. I woke up this morning with a lot of other kinds of anxiety, and those little demons I'm trying to wrangle. They are harshing my mellow, for sure. I should clarify the harshing is coming from thedemons, not the thunderstorms. Nothing big, and completely selfish, but the Cersei of my world won an important strategic manuveur, and I'm trying to rally my mental troops to defend my keep. Hey, nothing like mixed metaphors before 9am!

When I do my internal T-chart of plusses and minuses, a huge boon are my in-game friends. This is the bowling league, the chess club, the D&D club, the "meet you at the pub for a pint" group I wanted.

Here is one small example:

He will write his own post, so I'll leave him to it. This in one tiny bit:

Ceniza went to Firelands last night. Being a mage in there is extremely different from an enhancment shaman or priest healer. And a fail mage at that. (Still working on her--but think I may have found a solution, or at least some help.) But I remember back with Running With Scissor, the tricksy mage who was in charge of "setting off the traps" and I was always so intrigued by this. What did this mean? And I knew our RL told her to use her slow fall. Slow fall!! I have that!! Can I use it? Huh? Huh? 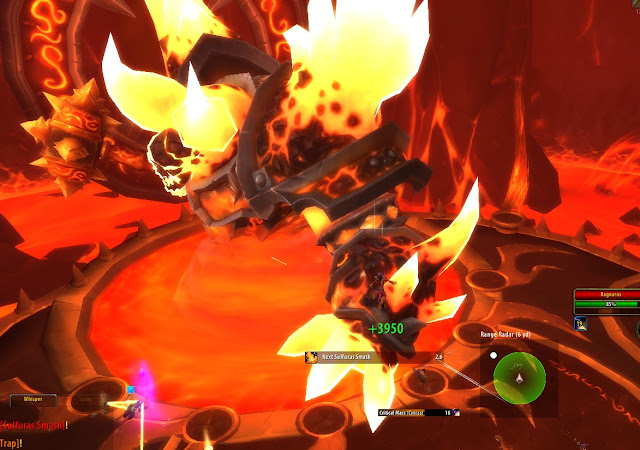 The first time I tried it I admit got over-excited and forget to target myself and went splat. Have no fear, would not make that mistake again! Run to hot lava pools, get blown up to the ceiling, target, hit slow fall, and gently float down all the while hitting my fire spells on the fly--literally! Grand fun, folks! I know Ceniza is difficult to see in that sea of red , but there she is, just above the +3950 health she gave herself from her herbalism and Draenei gift heals.

But what you do not see in this picture is I was with some of the nicest, calmest, mature, and just genuinely friendly players as I have ever known. I wish I could have bought them all a round or a latte or fudgsicle, because they were very sweet.

And if I ever doubt my sanity over alts again, I should remind myself of this post. The view was quite different from up here, above the clouds.