Like the woolly-weather of Western Washington, many bloggers have been lamenting over tiny, little things that stick like poisonous thorns in play, that shunt out our fun, and put a wet blanket over our squeely-joy. I can tell you all on good authority it is nothing personal. The RNGs are not in as much control as one would hope. One tentacle doesn't know what the other seven are doing, in other words.

Take for example Falling Leaves and Wing's post on Ice Chip. It's a tiny thing, but these tiny things add up to momental obstacles, the water-torture of insanity.

Another example is a conversation I had yesterday with my real-life gang of dwarfs, rogues, mages, warlocks, and druids. I was lamenting the silliness of Draenei not being allowed to be rogues, the rationale being their hooves would make it impossible for them to sneak up on anyone. A stalwart cross-dressing mage stated that he found the whole thing ridiculous, because game designers first and foremost need to be asking "What is fun?" and NOT - repeat NOOOOOOOOOTTTT "What can I make the player do?"

Believe me - there are game designers whose first words out of their mouths are "I'm going to make the player do..." and those jokers are the ones who are killing your fun. Period. Yes, they exist. Yes, they are limited by lack of vision, imagination, and have engineered their own realms of control and power. Poop heads.

There was apparently one person, with the initials CM, who decided he didn't want Draenei to be rogues, that was that. But I say, "Ah-ha, Sir CM!! I have you! Look what my imaginary creative powers of play can accomplish! I will create a pretend buff, a horse-shoe engineered by goblins and gnomes, that soften the steps of clumsy hooven rogues, so that they too may share in the glory of roguish romping! Hey, Tauren, too, if you like, can go all cloak-and-daggers, if they want! 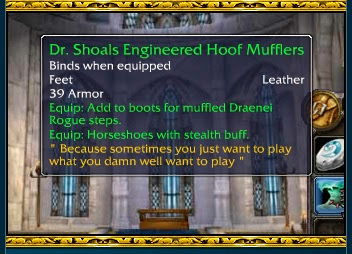 I have had a healthy debate about my wish of Draenei to also be warlocks. Why should Orcs have all the fun of using their evil powers for good on their teams? Whatever.

Time to open it up a bit, Blizz. Just a tad.

But no matter--we must play. If you don't believe me, watch the TED-Talk by Stuart Brown on play.