Ceniza had some important business with Landro in Booty Bay, and was perusing his many wares, seeking one particular treasure. a grim campfire. It would be a new trick in her bags, something to amuse her. The days needed some amusement, and if tossing skulls on blue flames like marshmallows on gruesome graham crackers, well, it was something at least to break the boredom. Mages should never be allowed boredom just as a courtesy. The day promised to be hot in the grasslands and cities of Eastern Kingdoms, but here in the southern-most tip, the water was warm, the breeze was gingery-and-lemon cool, and she had no where to go and nothing in particular to do. Landro allowed himself a quick glance, noting her lack of clothing, and appreciating the view, but only a quick one. He and his thugs were more interested in the vistas of gold, not the tall Draenei view. A little voice sent her one of those pink messages, "Can you help me please?"

"Not at the moment, I am sorry." Ceniza responded.

Ceniza found her campfire, and lit a fire right there on the oily docks. If the whole bloody mess of pirates, parrots, and goblins went up in flames, well, it wasn't her fault. They should have had stricter fire codes. But no, nothing, just a heap of big-eyed skulls, strange sticks and crooked kindling, and swaying blue flames.

"Do you still need help?"

And sure enough, he did. The voice came from a Dwarf, who was disoriented on the Alliance side, trying to find his way to Booty Bay to the neutral auction house. And if you asked Ceniza now why she thought she would come to his aid, she would just look at you, shrug her pretty shoulders and go set something on fire. Maybe she wanted to discover her own abilities with portals and parties, and see how far and fast she could get this little man to where he wanted to be. Because...he was in Stormwind.  No where near Booty Bay.

After some discussion, she decided to at least bring him to where the Flight Master was. She remembered hearing a story of a cousin who woke up in Ogrimmar and was so disoriented by being on "the other side" she fell off of the zeppelin and was never heard from again.

When Ceniza found him, he was wearing only his skivvies, crouched in a corner near the wall to the harbor and the farmer's field. He seemed so...vulnerable. Ceniza's maternal instincts are shriveled on good days, and non-existent on bad. But little near-naked Dwarfs...poor guy. 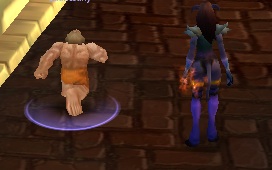 "Why aren't you in Ironforge?" He never did give a very good or reasonable explanation for that question. If he was a Dwarf, he would have begun his journey in Coldridge Valley, and he said he walked all the way to Stormwind.

She escorted him all the way to the Flight Master, round and down the alleys and cobblestones, up the stairs, always checking to make sure he was keeping up on tree-stumps of legs. She didn't blink for speed, but kept a brisk pace. In any case, he could not fly to Booty Bay, as the Flight Master was not offering services to that area for someone so lowly. Ceniza realized she could help him no further. She called in the big aid...Matty's Stone Drake.

Mataoka was enjoying a nice cup of honeymint tea when Ceniza asked for her assistance. Ceniza never asks for help, so this was surprising. Matty was not alarmed to find him wearing only his boxer-shorts: Dwarfs tendency to drop trou around her was common knowledge. She found the young gent, and when he hopped on her dragon-form back, his little butt-cheeks made a sound that can only be described as plotz....Matty shuddered, hoping she could find a pool large enough to wash off her dragon form. Naked Dwarf cheeks can be felt through dragon armor, just letting one and all know.

As they flew to Booty Bay, he confessed to her in his usual form, he was something she might hate, and would regret helping him.

"No worries, as long as you don't say Undead Rogue, we're fine."

"Then I might have to give you a parachute and send you on your way!"

"Well, I was one many years ago, but now I am a Troll Warrior."

Matty wasn't sure that between Dwarf butts on her back or a Troll, which would need the most scrubbing, but good deeds usually come with germs. Goes with the territory.

He found his way to the auction house, and they said their thanks, welcomes, and farewells. All Matty hopes is that if this little Dwarf's friend, the Troll, finds a chance to do something nice or generous for someone else someday, that he does, remembering a kind Draenei girl on the Alliance side.

Matty saw some storm clouds to the west from the her vantage point near her secret waterfall, heading toward Theramore. It was still a beautiful day, though.