Lothair rarely relinquished his guard: as a paladin, his instincts were aggressively protective. But today was a day to fish –casting nothing but a line in the pond, and see what surrendered to the bait and hook, not mace and shield. The summer Stormwind sun warmed his face, and he felt his shoulders release tension. Then, that presence—creeping, whispering, like ghost-steps on his grave; turning, startled, a little Draenei girl stood behind him, solemnly staring at him with oversized eyes, disturbingly self-possessed. She strolled into the lake, as if she were walking into her mother’s arms. Alarmed, Lothair dropped his pole and jumped in after her, fearing there wasn’t something quite right with the child, and she would drown. She swam away like a little fish, clothes and all, as if she had gills. Well, what the hell—these Draenei were odd ducks—he thought, annoyed by his wet gear and her preternatural oddness.

A few days later, he returned to the pond, and she was there, too. Her presence didn’t unsettle him so much, and he asked her name, which she openly gave: “Olivia Jayne.” And he didn’t worry about her further. She was fine on her own. 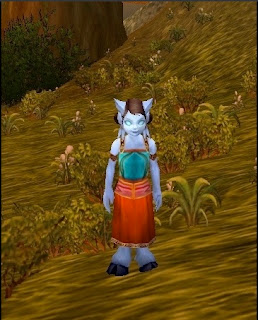 Writer's Note: I'm with Lothair on this one -Olivia Jayne is sweet but a tad disturbing. What other NPCs kind of put you off a bit?