Yesterday, a minor calamity. My coffee maker, well, it kept leaking and damaging the counter, so much so I found a puddle of coffee in a mixing bowl in the cupboard. So, into the garbage, and going to wait till payday to get a new one. And the a/c broke. It keeps freezing up, and it finally turned warm. These are silly, menial bugaboos, but suffice it to say I'm not feeling super sharp right now. My similes are sloppy and my metaphors mopey.

Navi provides another amazing comprehensive guide to her tree spec and choices. See people, this is what I'm talking about! Now I am going to take a look at Momo's and shake up her tree a bit:

Also, Tzufit has a wonderful reflection on our sense of competition and raiding progression:

Finally, JD writes an editorial on why we should have account-wide ignore:
http://arcanewordsmith.wordpress.com/2012/07/25/improving-the-social-aspect/

His idea has been expressed recently even in my guild chat. I was musing to myself that if that happens, at some point none of us will be talking to anyone in game, kind of like how no one likes to go out anymore--we all just nest at home. And in our nests, if we find friendships in the social interactive world, and get to pretend we're flying and killing dragons, what a bonus!

This brings up a bigger issue, and I was trying to find the research to back up this theory, but in any social context, things start off great, and then disintegrate. My druid Momokawa has been the recipient of asshattery, and I am hesitant to even log into her character for the concern that again, she will not win the healing mace to make her more efficient, or any of the tokens she needs to help her help others. But that's what I get for having so many alts and enjoying the game on many levels--shame on me! If I had just focused on one or two, they'd be flying around on their blue dragons with talking staffs and there'd be cookies and ice cream for everyone! (This brings up my annoyance - I just wish we could trade good weapons across our alts. Know it will never happen, but sure would be cool.)

Some links to articles on social interactions and computers:
http://www.kpbs.org/news/2010/jan/12/how-technology-affects-etiquette-and-social-intera/

A link to what motivates us: (love, baby, it's always love)
http://persweb.wabash.edu/facstaff/hortonr/articles%20for%20class/baumeister%20and%20leary.pdf

I have no doubt that the wizards at Blizzard take long, hard looks at these kinds of studies.

However good the intentions are of MMOs and their desires for us all to get along, work out our own issues, and report for spam, my continued response is we are not sea-monkeys. We did not spawn out of salt and water. Well, we did, but okay, I'm hoping we've evolved a tiny bit since primordial soup and crackers days. Soup to nuts is more like it.

Fundamental:
We all want to belong.
Complicated:
In the efforts to belong, sometimes humans are cruel thinking that is what will gain them social status.
Fundamental:
We all need play.
Complicated:
In our efforts to find respite and relaxation, sometimes we choose activities that are competitive and goal-oriented.
Fundmental:
Sometimes people are jerks because they are.
Complicated:
Studying their motivations for psychotic behavior is a full-time job, and we as a society often fail tragically.

Case in point: Yesterday I was went to LFR with my dear friend. There was this shaman healer, and something...wasn't right. A druid grabbed the healing off-hand, and you would have thought he punched the shaman's mother. The shaman would NOT SHUT UP, even after the druid whose main space was resto, offered to another healer besides the two who were griefing him relentlessly, and I mean relentlessly. I even opened my mouth. The shaman kept yelling NINJA NO HEALS I WILL NOT HEAL IF DON'T GET THINGY NINJA NINJA....and guess what? I voted to kick after we wiped twice on Blackhorn or Blackthorn or whatever, and he was not healing anyone. It took another wipe before people clicked to kick. Unbelievable. It was quasi-hostage mode. I know certain personalities I like to call "hostage takers," who play the social game stakes way too high. These are some scary, crazy dudes. Maybe he read The Psychopath Test by Jon Ronson. Or maybe he didn't.

The fact is behind the screens are many mentally imbalanced folks. We are not doing a good job as a civilization in taking care of them. Now, I am about to veer off into territory I don't want to, so I'll stop now.


So when life takes your coffee pot, make tea. It's more civilized anyway. 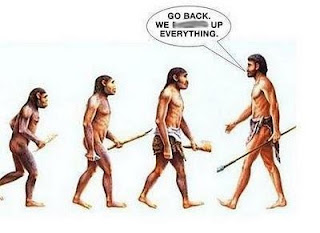