RTMT: According to plan... 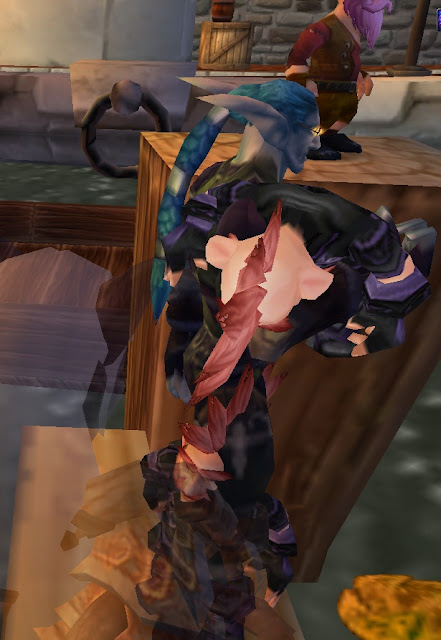 I have been curious about this vignette for a long time, but not so curious I haven't done any research on it. I forgot to write down last names, but the Night Elf is Kyle, the young gnome slung over his shoulder is Chris, and the lavender-bearded gnome on the pylon is Travis, a hot coffee vendor. So, from the context clues I sense that perhaps Chris had a bit too much to drink, trying to keep up shot-for-shot with his much larger friend Kyle, and Kyle is taking him to get some coffee to sober him up (which is a myth: coffee only creates a jittery drunk). But, Kyle is wearing glasses, and to me, looks like the sensitive poetry-type, so perhaps he was the designated driver. The gnome standing on the ground next to Kyle --not sure. Have to go log in and check. Or perhaps, poor Chris is no longer with us, and wants to go swim with the fishes. The villain in Breaking Bad looked like a sensitive poetry-type too.

Doing some investigative research on these characters takes time. Yes, I have a cup of hot coffee next to me, and everything is quiet. The weather patterns have been rainy/stormy nights with clear and sunny late afternoons, just in time for raiding, etc. Makes it kind of tough when the barbecue grill is calling, and the chicken is thawed.

...Speaking of raiding: Imagine an expert from Elitist Jerks is in your house, watching your moves, and wondering how you could be so stupid that you moved Earth Shock away from Flame Shock and weren't liberally using them both? "They share cool downs, and I like to focus on Flame Shock because of the use of Fire Nova when I need it fast." "MATTTTTTYYYYYEEEEYYYYY!" *Head Slap* Cue the lecture on spell use and rotation and what a noob I am. Awesome. Self-esteem: 0, Beating Myself Up: 5

You get the idea.

I have been sensing for a time that I was allowing myself to become too distracted with my alt-factory. I am also too distracted to get anything "real" done. Starting on the second team for my guild, and we're still going through some personnel placements, I realized I could be doing much, much better on that little shaman. One of my great game friends has a warlock and a rogue. That's it. And they are amazing.  He has crafted these two characters into epic Azerothian heroes. And like Navi, who does not do alts, but focuses on her stellar healing Druid, playing one to three characters perfectly is a conscious and qualified choice. I am once again directed to Noxxic, and MMO Champion, etc., and told to READ. I was informed that I should be able to get 50K out of that shaman easy. I took a screenshot once of a player in LFR who was doing 50-60K, and inspected his gear, and oh yeah...all of the highest quality. But still, wish I had kept his name/screenshot so I could go look him/her up, too.

Do not misunderstand me, this is my own dumb epiphany, late in the game I realize--what "most" raiders do is this: They raid. They have a group. They raid. They gear up their players. They raid better. They do more healing, more tanking, more damage/dps. Their obstacles include: personnel changes, RNGs (things don't drop equally for all players), or perhaps a nerf doesn't come in time to stave off these drop deficiencies or personnel changes. If all goes as planned, the raiding team moves to tougher end-game content, does heroic modes, and begins to look to the raid achievements tick-list.

But that is not what happens for the hoi polloi, the rest of us. The rest of us have to watch as others get the trinkets we need, or our axes or polearms get slung on the arms of other players, or taunted by trying to do our part, and learn the dance steps, and we trip on our own left feet.

What I wish is a data collection of the real stats sometimes:

So, like a hangover, (I hope that little gnome is not dead, just drunk) I'll get back in there, and try to balance real-world duties with my Azerothian ones.

I will share that before the raid, which included some down time because of many players suffering from server issues, a handful of grown men were conversing about the new pet battles, at length, and tabbing out for research on those, and not fight strategies. No, I'm not tattling. Just sayin'.