Truth be told, I cannot think of a title for this post. That one seems to snarky, but others seem too self-important.

Let me share an observation, a meme, a collective consciousness of Azeroth:

I am starting to keep score of how many times a players wants to go on a mog run, or get together a group for Ice Crown, or fill in the blanks for rep. Many just say they're "waiting for expansion," but I think there is something more to it than that. But for some reason, and I'm not sure why, (perhaps it's a culture of the game I am not familiar with), many players seem almost embarrassed that they want to go back and finish some achievements.

What is up with that?

Let me give you a few examples of how I know players just want to play, no apologies:

I am gratefully part of a cross-realm ICC Sunday night run. I mean...like really grateful. I started this last May with another guild, and they either dropped it, dropped me, or got swept up in their Firelands achievements. The new shiny came out, and that was that.

Turns out, when one of my guild officers saw that I was there, was saddened, because she's been saving her lock-out for a very long time to complete it. Lady: read to the end, please.

Here is where I stand now: 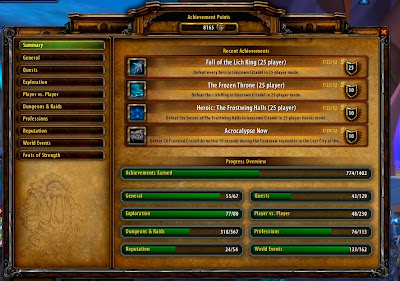 And, while I was on, and came out of my Lich mode, a good player friend said, "Dang, it stinks to get a cool achievement and no one's on to congratulate you!" I asked him what it was, and it was this: 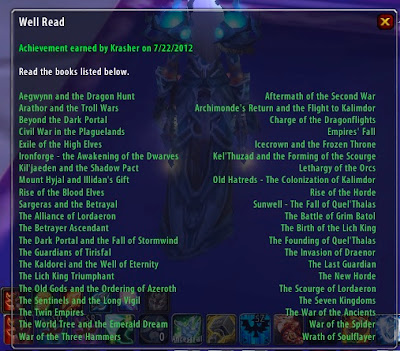 Congratulations indeed!! I LOVE this achievement, and it's been on my list, too! I recently finished A Feast for Crows, having reading the first four Game of Thrones epics back to back, which I do not recommend. That is really the issue with coming late to the party, isn't it? In this push-push-push for prorgression, I would just ask that players give themselves permission to feel proud and have fun with older content, too. I'll tell ya what--Arthas can still kick your tail in heroic mode, and those achievements' mechanics are still tricky and take coordinated dance steps. Not everyone can jump up and do the Shag or the Pony--it takes a few trips to the punchbowl and a willingness to look like a dork.

Lady: If you want to do these, I'm your girl. Woman. Whatever. You are a busy lady, as I am, and your experience as a progression raider far outweighs mine. But if you want me to help you coordinate these, and can promise to take a Vow of Fun, I'm in. I'll be continuining with my cross-realm compadres on Sunday nights, but hey, look at the guild calendar and see what works for you. Knowing your resources/personnel is about 90% of this success. Herding cats can be rewarding and profitable. And you might get a cool hat.
Posted by Matty at 6:20 AM