Well, I made a tough but solid decision when it comes to raiding and that goofy shammy. Mataoka -- I have been feeling it for awhile. It isn't fun to be melee in raids at gear level. I have hinted and suggested I bring other better equipped characters - Kellda has "the" cloak, green fire, and great gear; Zeptepi is working on her cloak, but both warlock and priest are well represented in the 'big' guild, so they don't belong. I would have gone completely restoration on Mataoka, too, but they have great shaman healers and didn't need that either. Logtar is a wonderful GM/RL, and I adore Hawtpocket--she is one of the best players, raiders, tanks, and I just adore her personally. I told her I am thrilled we are friends in Azeroth, and hope to continue our friendship.When the decision is made to try a 25-man, and I'm already bashful about melee in raids, and don't have the experience needed (all my own fault) and then it gets moved down to a ten, I realize as I am looking at my own house, my own family, who falls somewhat apart without me; when I'm trying to raid, I ask for my family's time without making it worth my own or anyone else's. Then, when on Wednesday Hawt told me the guild was forming a flex and I asked the lead hunter if I could go and he said they were full (I didn't think Flex's could get full). This may have just been a miscommunication, I'll grant that. I decided to read between the lines and give a move some deep consideration. I am so proud and happy of how Drunken Fish has been growing. Having Mataoka there to bring points, play, and repuations to the guild will only further help it. Also, it dawned on me that it wasn't that I was running from something, but running to. Playing enhancement shammy takes a lot of practice and work. This character started off from the beginning doing everything 'herself,' and she is well-suited for achievements, solo-play, and the occasional goody bag from healing. 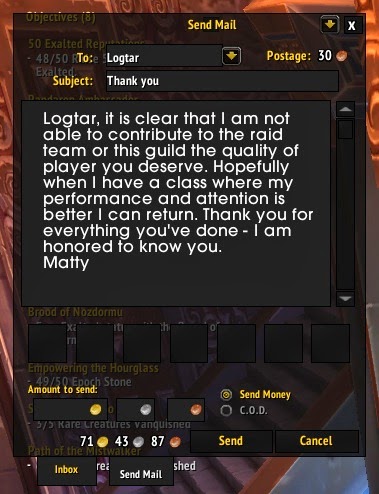 People often ask me why I stay at my real-life job. It is hard, it is stressful, and I am not being hyperbolic when I say potentially dangerous. But I stay because I contribute and effect change. My skills and expertise move mountains in my real life. Sometimes they're Sisyphean boulders, but I've mostly learned how to duck out of the way. Everyone wants to feel like they matter because guess what? They do.

All players say play what makes you happy--first, figuring out when we're happiest in game is not always obvious. But once we see that --it's a clear path.


Drunken Fish: Keep up the good work! Thank you for all you've done. We're almost to Level 19!


Oh, and I have been giving this a lot of thought too: http://wow.joystiq.com/2014/03/27/breakfast-topic-would-people-pay-for-character-faction-copy/ I would do that in a red-hot minute.