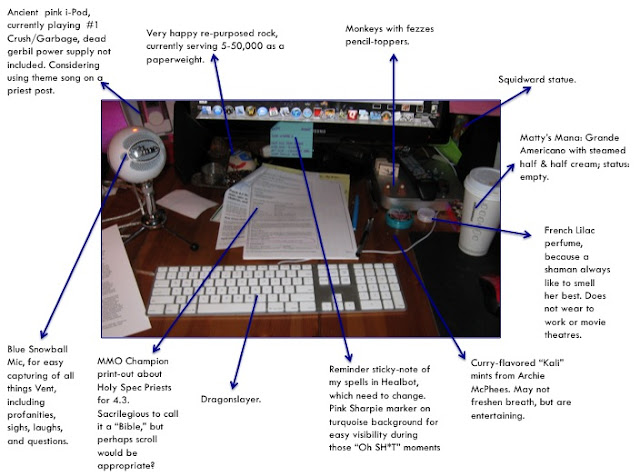 These are three convergent zones that ignited this post, though I had been sitting on the idea for a while:

First, Tome pondered the question about what we marmots do in real life.

Then, Navimie wants us to get our geek on.

Since I fell down the rabbit hole into Azeroth, the climb back out as not been easy. (Coincidentally, Vidyala's post on how lovely it is to have dinner with a loved one came out yesterday.)

Real Life:
Here's the thing: although there is some important professional/real life and defense of playing WoW in my current profession, I try to keep the two separate. I am good, if not great, at my job. One could even say I am a master. It's one part lion-tamer, one part cultural ambassador, three parts mother earth, and five parts "Hulk Mad." (No plaid shirts were harmed in the making of this job.)

I seldom talk jobs/careers with my players friends while we're hanging out together, and they rarely bring things up. Once in a while we'll mention something, but the workaday world is left behind for a bit. That's one reason why I loved Ironyca's series, because it really made me think about who are my real id friends, and not. I laughed when I read about someone saying they were someone's brother to get some peace and quiet, because I've been told that, too. Not saying this friend was fibbing, but dang, I am sorry if he felt that he couldn't tell me, "I just need some peace and quiet," because I would really understand. My real life involves a daily dose of interacting with a lot of people, and my time to be inside my own head is precious to me. (In truth, I think he was dodging an aggressive gnome girl--they can be clingy.) In any case, I find that I have the calm, mellow friendships with my player friends whether or not they are real id friends or not. Maybe that just comes with maturity--you just learn it's okay to say no, not feel bad, and move on. It takes women especially a while to learn to say 'no' and not feel guilty. Walking around Barnes & Noble the other night I couldn't help but remark to myself how many books on the shelves and calendars were all about 'women who do too much.' Bitch, please. Oprah's off the air I think, so relax. She's not looking anymore.

Anyway, note to friend: If I ever bothered you, I apologize. I miss you, and hope you are well. Haven't seen the gnome girl much, so the coast is clear. You can come out now.

Getting My Geek On:
Now, the other side of this issue: In Azeroth I don't have much real life shop-talk; conversely, in real life, I don't speak Azerothian "common tongue." There are a few who know my compulsions, and one dear friend even has a brother who plays, but he is a solo troll, and has no interest in talking to anyone in game, ever. Nothing personal. A colleague will ask if I spent time "in the service of Good King Wyrnn" (that's how he talks - gotta love it) and yes, indeed, kind sir, Azeroth sleeps safe once again.

But as far as being a general geek/dork, oh yes. I just didn't know I was. I just found out that there will be no Blizzcon this year and I am heartbroken.  Damn! And I was already figuring out how to rock my prosthetic horns (in a manner of speaking). Maybe I should have known I was a geek since one of my favorite books is Geek Love by Katherine Dunn. But those are the real McCoy, chicken heads and all.

What's been funny for me is that I have known grandmothers and mothers who are guildmasters, and neighbors who invited other player friends to visit, cross-state. It's like a big WoW treasure chest, but the X that marks the spot to find other nearby players is a confusing map, and every compass spins wildly. Meaning, I don't have a lot of local support. Some of my bestestest people in my life play, too, but we don't play together per se. Sitting on the couch and farming ore while the Daily Show is on doesn't count, does it?

The above diagram will give you a little peek on my inner-sanctum while I play, work, and check my e-mail. And while I'm driving to work, this nod to the Big Lebowski can be seen barreling down the streets: 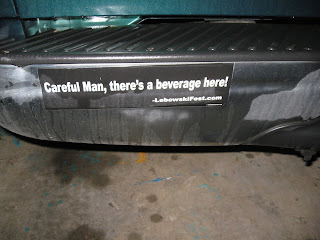 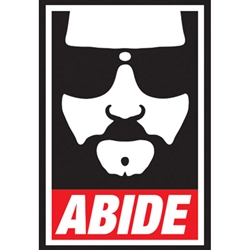