Diamond in the rough...

"I feel, well, a bit useless right now," Zeptepi thought as she inspected the guild bank vault again, feeling burdened that she didn't want to organize or clean anything in there. Her guild-mate by all rights should be guild master, but he just indulged her fantasies of royalty. She moved a few things here and there, put some trash, rather "treasure," on the Auction House, hoping someone would spend a few silver on her wares. In her little guild of two, the better half was off fighting in some battle or other, as usual, but he was not in his mage form, so he was previously engaged. She didn't want to pull him out of the battle and have him port her, that would just be height of bossiness. But, the alternative: to fly everywhere to find all the elders seemed, oh and she felt so guilty for saying this, tedious. She knew they would give her candy (stale) and perhaps some gold (more likely coppers), and try to impart some wisdom. On a whim, instead of veering off to the flight master, she went down into the depths of Ironforge, her kitty-cat, Susuwatari, following closely, yet paradoxically remaining independent. Zep marveled at that. "How do cats so easily seem to love and spurn you at the same time?" she wondered. Down in the depths she went, until she came to a group of regal-looking and stately Dwarfs. In the center stood a frozen figurative sculpture, which Susu immediately leaped upon, perching to either dominant the room, or hold court, Zep wasn't sure what the cat hoped to accomplish by her ill manners. (As long as the feline didn't confuse the diamond dust chips for a litter box, no diplomatic breakdown would occur.) 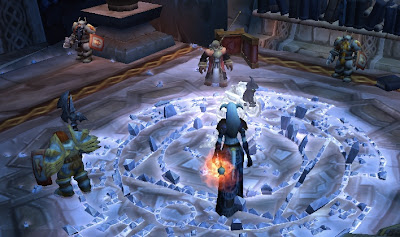 She noticed that one Dwarf seemed to be in charge, and she introduced herself with a sweet curtsy. He replied in kind, "Aye, lassie, I am Advisor Belgrum." 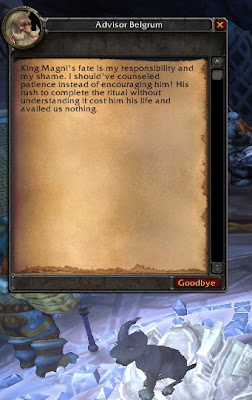 The good advisor proceeded to share with Zep some sad tale of grief and guilt, something about patience and whatnot, but all she could see was that he was wearing the robes she longed for, and by gods, looked better in it!
Zep gave her condolences, and beat a hasty exit through the geologically-created catacombs, Susu following close behind. (The cat's logic was, perhaps from that height, the dwarfs would seem like large rodents, and she could practice pouncing, but she abandoned that plan when Zep left the hall.) Zep thought it may be better to go seek out the elders than bother poor, stiff King Magni today. At least the elders were still breathing.

Writer's Note: Since I have predominately played on the Alliance side (hey, I like hooves and horns, what can I say?), I am certain there are quests and secret hide-y holes just like this one in Ironforge on the Horde side. Any favorite secret spots you'd like to share? Or, by the telling of the secret, destroy it? That is true, so never mind. Curiosity killed the Feline Familiar, you know!
Posted by Matty at 9:00 AM