Last year around this time, I inadvertently went on a WoW diet. I mean, I really started getting into the game, and didn't mean to go on a caloric diet, but I did. By April, I had lost weight and felt pretty good. There was a big health slump in February when I got bitten by a zombie, but I'm much better now, thank you. The zombie was last spotted at the corner of Pike and Western, but hasn't bothered me since.

Now, I feel that my resolve is weakening. Those fresh snickerdooble cookies? Don't mind if I do. Raining out when I want to go for a walk? Bah, rather go farm some ore. Or this excuse: "Well, I'm in a dungeon queue and it's fast," so I can't do my usual tactic and dance like a night elf around the room while I wait.  I can't expect Blizzard to be all things to all people--I don't want them to lengthen dungeon waits, or have pop-up reminders to back away from the chocolate cupcake, ma'am, before someone gets hurt...but I do need to reign it in a bit.

Today is a day when those of us who can stay home in snow, do. It may surprise folks to learn that it does snow a lot here in the western side of the Cascade mountains, but indeed it does. Heck, we even has ski resorts and stuff. And because of the narrow, hilly roads, not a lot of plowing happens. Which is fine by me.

But it's also Tuesday, which means my valor point cap grind starts again for Matty, Lupe, and Zep. Talk about a boring treadmill. I only need the shoulders from Archbishop on Luperci, but other than the tier gear for all, it doesn't really matter. And I kind of ponder, "What's the point, anyway?" I'm not on a ten-man team anymore, although the general shot-gun blast of guild invites for general raids was interesting: the GMOTD said something like, "If you sign up for a raid, show up!" Of course I think that's personally directed at me because I was one of twenty or so players who signed up for a ten-man Firelands' run the other night, and forgot about it. One thing you should know about me is I hate to be considered ill-bred. (I may be rude, but don't like others to think so.) My southern mother would have a hissy fit if she ever got wind her daughter was less than well-mannered. (Fortunately, that southern side is also heavily Irish-influenced, and that gives us all the necessary grit we need for survival.) I didnwannago. I don't blame them for the admonishment, not at all. They're right to put out that reminder. I just, it's that, oh never mind.

What I may work on this week, in lieu of treadmill, is: 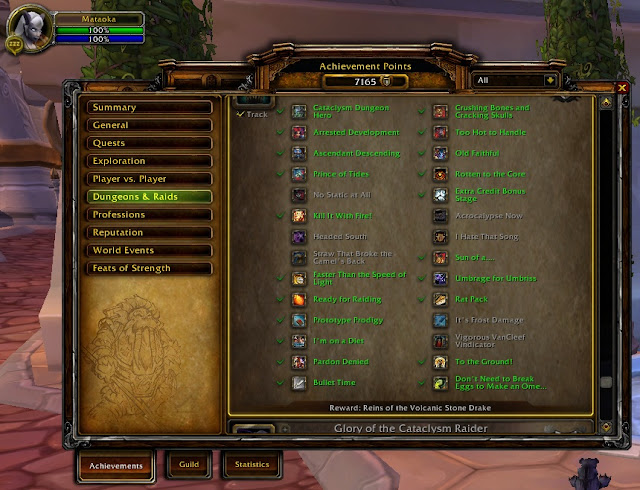 That's it - only seven before I get my drake. Easy, right? Just like those last ten pounds. If you would like to join me, let's go! I'm game.
Posted by Matty at 7:57 AM

Email ThisBlogThis!Share to TwitterShare to FacebookShare to Pinterest
Labels: what the hell is wrong with me