This past week was an unexpected "vacation" as I have ever needed, but that description and reflection will go on my professional blog, not my escape-hatch sugar blog. So, yesterday, as I was sitting in Starbucks (I found a nice lady to watch my computer while I ran to the bathroom and got lunch, because I know you were worried), I got a message that my Internet was on! Hoozah! Maybe, just maybe I could run through seven new dungeons between then and the time dinner was to be made. What could go wrong?

With the help of a trusty guild-mate, a healer, we got through the first four without many issues, save for a few potholes, and I think I broke an axle or two.
Bottom line: I need to study those dungeons a bit more.
In the Jaina fight, apparently there are these blistering fire thingies that pop up, and if a ranged dps'er doesn't stand on them, they explode, and do a lot of damage to everyone. I swear, in the grinding I have done on those on a melee, tank, and healer, I never once noticed them. I have never been in a group that wiped on the Jaina fight (she tries to be all bad-ass, but really, just can't pull it off), until yesterday.
Also, I am struggling against some bigotry. Yes. I said it. I confess. Aggro & Casters* seem to be the issue with these dungeons, which are the worse issues besides really bad dialogue. We got Well of Eternity a few times, and that damn Queen Azshara fight. After dinner, ran two of these and for some ungodly reason adds kept killing my healer. I have no idea why. I taunted, I beat down, I grabbed, sweet-talked and cried. Nothing seemed to work. In my defense, all I could say to her in Vent was that she had witnessed me tanking it just fine earlier, and I just couldn't figure out what went wrong.
The Youtube Video from OMFG wouldn't embed, but here is the link: http://www.youtube.com/watch?feature=player_embedded&v=DF-ALycXVww
The bigotry, oh yes. That is with some mages and warlocks who get upset at the Hour of Twilight dungeon. I cheered every time this one popped up, because it is a cake-walk for tanks. Not so casters in the rogue fight.

To quote: Thrall will help during the encounter by putting up the same totems he's been using in the preceding trash gauntlet, so whenever possible, your party members should stand in a totem range. When she's low on health, Asira will put up a Blade Barrier. To lift it, she needs to be hit by an attack that deals more than 30000 damage, so save a cooldown for this if your party has low damage output.

I will concede one point, and that is I should 'back out more slowly' from her smoke bombs. GTFO--you are not my master! No! I will not succumb to your blaring sirens and run out of smoke all crazy-like so that a mage or warlock can show off his numbers. I know that dps players are all about the numbers, numbers, numbers, but in truth, by the time I get to my sixth heroic in as many hours, frankly, Scarlet, I don't give a damn. Shut your pie hole and let's move on. The bias comes in because I have noticed a generality, that mages and warlocks tend to, well, let's just say put in a complaint in the RNG Suggestion Box more often than not. One dungeon two DKs hit over 59-62K regularly, and they didn't complain.
Regardless, whatever.
Luperci got some hot new gear, made of thorium. (Apparently the Thorium Brothers don't waste a lot of materials on straps and frills.) 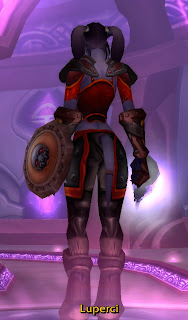 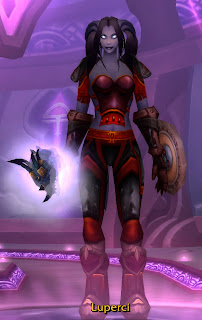 And Ruby of Ruby's Riches sent Zep this gorgeous robe:
Moral of the story: If you're going to wipe, at least look good while doing it. And, I capped out my Valor Points. You're not the boss of me, stupid Comcast!


Postscript: methinks I thought of another great guild name...
Posted by Matty at 6:24 AM