I finally figured it out, what  contributes to my current efffffthattude.

In my work we get new rock stars all the time. I used to be one of those rock stars. Meh, whatever. But I also recognize when I hit a plateau, and that has most certainly happened in Azeroth (and in Real Life).

But let's not talk about Real Life. Let's talk about my shaman problem.

Last night in Flex, my three trusty coins in my pocket (why don't I have more? Inflation.) Off we went: I made some tactical errors. Some? Okay, more than a few. First, I have no idea where in that mess of pixel vomit one is supposed to click on things to be a scorpion with the Klaxxi, so add watching videos to my list of things to do. (It's a fairly substantial list/) Second, don't ankh unless the RL tells you (Turk, you would be proud of me - I didn't die on the first pulls, but when was asked to switch to heals, died then). Third, don't wake up at 330 AM and not get back to sleep and then think you can make rational decisions and not misclick on coin rolls. Yup, I did that. So we finally downed Garrosh in Flex after four attempts, and there I was with empty pockets, and 19 gold. In fact, it's been gold and more gold for ten weeks. That the RNGs do not favor my beautiful shaman with current gear actually -- what?! -- has me down in the dumps and discouraged.

Like, "tiny tear welling up in my eyeball" discouraged. Listening to Vent chat for the first 10 minutes or so about how melee (MAY-LAY) is awful. (Mine in particular is especially bad, but that's another story.) I don't mind getting asked to go to heals when I want to do melee, because has 'everyone knows Blizzard hates melee.' But my healing weapon is still from ToT, a 502 level, and so is my shield, because every time I've tried to obtain a new one either in Flex or mainly LFR, the RNGs pull the gear rug out from under me, another reminder I am not allowed to play the character I want to play, or the way I want to play it. My heals were 50% of what the other two healers' were.

We need more running heals, and not a limping combination of Spirit Walkers' Grace and heals, but true heals-on-the-hoof spells like every other healer in the game. No joke. How do I know this? Because I play every other kind of healer in the game. Druid? Toss leaves, go. Priest? Shiny shiny bling bling, same with paladins: Monks? Stop Drop and ROLL baby! Sure, our big totems drop a manabomb of luscious heals on the crowd, but it's short-lived and stationary. Baby, we were born to run!


Ascendance has an awesome spell, Stormblast, that looks like an AOE spell, but it's not.  Enhancement Shamans are so much fun to play, so much fun to watch, so unique in their niche in Azeroth, but I do fear they are neglected. 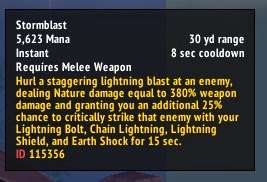 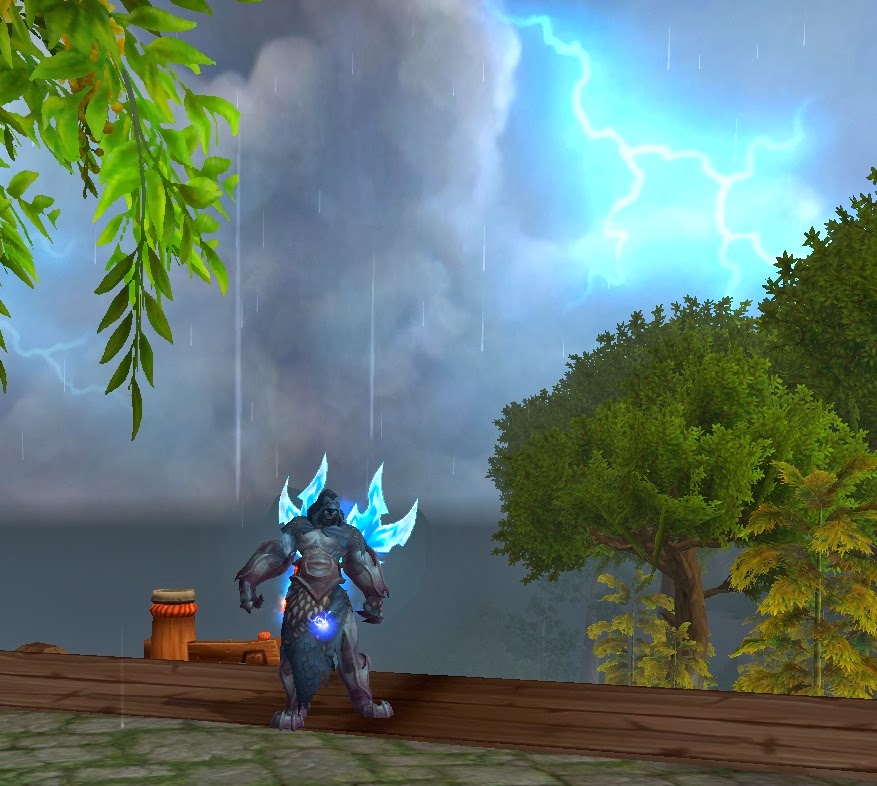 So - my idea.
I think it's time to devote one corner of this blog to being an enhancement shaman. LFR does NOTHING in terms of fight mechanics training, and I don't really know how to feel about that. I will never be up to the level of Cynwise or Vixsin but I also know if I don't take a hold of this, and soon, I will mourn the loss of a beautiful character in Azeroth. Perhaps my focus on enhancement shamans will renew the class, and encourage others to take this on, and maybe, it's my hope, Blizzard will consider a few love tokens our way.

Postscript: unless it's a dragon form, I'm not sure we need a new class. We need to make the ones we love better. Okay, Vykrul form would be cool too.
Posted by Matty at 6:54 AM

Email ThisBlogThis!Share to TwitterShare to FacebookShare to Pinterest
Labels: shamans, the ramblings of a overworked shaman