In the years I have been a "grown-up," and my domestic situation* has required a vacuum cleaner, I can count a minimum of now, seven, no, wait, eight, maybe even nine, (ten?) at least, in the past two decades alone. This is an average of 1 vacuum per every 2 years. If each vacuum costs around $89-$129 plus tax depending on the state where I'm living, then it is equivalent to "renting" the vacuum cleaner for .17 cents per day, or .13 euro.  Now .17 cents does not sound like a lot of money. And yet, here I sit, another January, taking down the tree (I insist on live, but dead, trees. Sorry planet. Can't quit my pagan ways), and of course the inevitable needles embed every nook, crevice, and crack. I will find Christmas tree needles from '13 until twilight's last gleaming. My dog Snickers is so thrilled with the greenery on the carpet he has been rolling and scratching his back all night. Of course, Vacuum X is broken, and I don't have the wherewithal to go to Target and acquire Vacuum XI. Each vacuum succumbs to the power of the Matty-shack: needles, animal bedding, dog hair (of dogs' long past), leaves, (I have no idea, but they get in here), and other flotsam/jetsam that demands to be sucked up, dumped out, and molecules that simply must be controlled by ME.

*Not required or demanded by a partner, but had the floors that needed vacuuming: partners optional.

Now: it's almost the end of my winter holiday. It's drawing to a close to a frantic winter friction-skid spring. My heart is starting to beat faster just thinking about it. And the thing is, that .17 cents is starting to kind of piss me off. I visit Azeroth to waste spend time in that beautiful world, (wait for it: extended metaphor developing!), and just like beautiful promises of Christmas trees and Santa bells, Azeroth, so shiny and pretty, just keeps breaking. For about every one victory: mount, pet, loot drop, there are about ten proverbial vacuum cleaners waiting to break.

Case in point: The Emperor.

Now, the Emperor is a pretty cool dude. He's made his peace with his past indiscretions, and is truly sorry. He lost his way, let his ego and pride come before his people, and now hangs out in the Timeless Isle like some benevolent talking fortune-teller hologram, promising wonders galore. Just get exalted with him, and that and .17 cents a day (100,000 Timeless Isle Coins) he will grant you a pony. 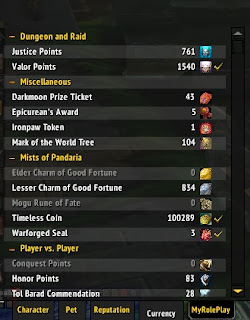 Now, Haanta kept up her end of the bargain. She and Lobito, the red wolf, or Patron, the white wolf, roam the countryside keeping others safe from any manner of animal or beastie, and scavenges a few left-over pelts, too. She handily gathered up enough for 100K coins, and one would hope, one would THINK that by the time this happened she would at least be honored with the old man. 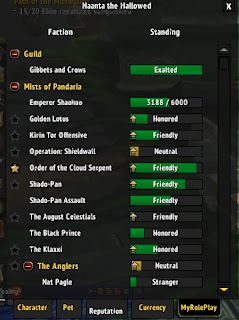 Not even close. She's just Friendly stature. And though she knows she's supposed to be killing the Yaungol for repuation, it breaks her heart every time Lobito or Patron attack and have no sense to get out of the fire. They die for her, and their loyalty is too much to bear. At 11-12 points per kill, too, it's a long process. The completion of any ! from the Emperor equals 275. Dios mio: Back to the vacuum metaphor: it sucks.

Path of the Mistwalker. This reputation grind is meant to be in the style of Timbermaw Hold, which is long and only for true reputation lovers. 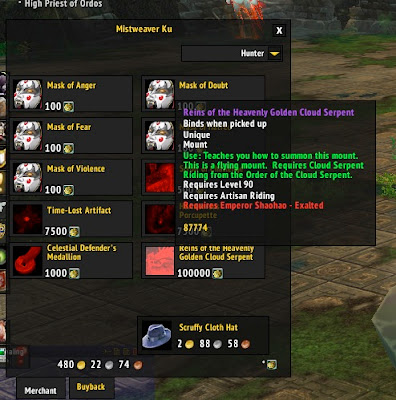 Look, I know. I know. It's okay Haanta. Really. It wouldn't be so bad if everything in real life was going smoothly, too. That that human of yours didn't have so many unfinished projects, to-do lists, promises, and appointments. Maybe you should buy back that Scruffy Cloth Hat and cool your heels hooves for a bit.

Postscript: List of current WoW projects:
Get Mataoka up to 60 exalted reps
Get Kellda her cloak, and then a healer, then a tank…
Level those gorgeous pets (thanks, Señor, Turk, Tome, everyone!!)
Level another Dornaa.

What? You didn't know? Yes, I got Dornaa to Level 90, and then gave her as a gift to Young Leet Druid, who promptly changed her to a Dwarf, male. /sigh

So, if you see me with another Dornaa at say, gee, level 4, be kind. Can't help myself. Wonder if Navimie wants an Alliance alt? :)

Update: One rep down:

Email ThisBlogThis!Share to TwitterShare to FacebookShare to Pinterest
Labels: Haanta, sucking sound of my life