Day started off like any other day. Woke up at 3:30AM, couldn't get back to restful sleep, Blizzard forget to put the Love Rocket in the candy box for me, chased down minions and blackguards at work (literally), stayed late in a meeting (trying to go through a mountain of paperwork) and was late to Flex. When I got home, CD Rogue informed me he and his entire team at work had been laid off. Now, if you know me, you know I will cry and stress about this, and then dust off my fears and find my grit. But right now I'm struggling to get motivated to go into another early morning meeting with big puffy red eyes and effect meaningful change in other people's worlds.

...one funny thing did happen last night. The big guild has a lovely new priest, and I'll forgive her Valley-Girl voice in Vent because overall she seems nice. (If you have seen 'In A World' movie by Lake Bell you know my sentiments toward SBV: Sexy Baby Voice.) I took Kellda, and my fat fingers and tear-soaked eyes could barely see the screen, so my performance was sub-par. I realized later I won tier gloves, and already had Warforged tier, so after the raid whispered her, asking if she wanted them.

Here was that exchange:

I am only sorry I didn't get the fourth and fifth screenshots of the exchange, where she finally realizes what I am asking - she had tier gloves, and thanked me profusely for offering them to her. I really think it was my use of "dude" that caught her attention. I could not figure out at first what the issue was, but I suspect wine may have been involved: too much on her behalf, too little on mine.

Oh, and I have Kellda all in hues of green/gold/yellow to match her pretty new cloak wings: 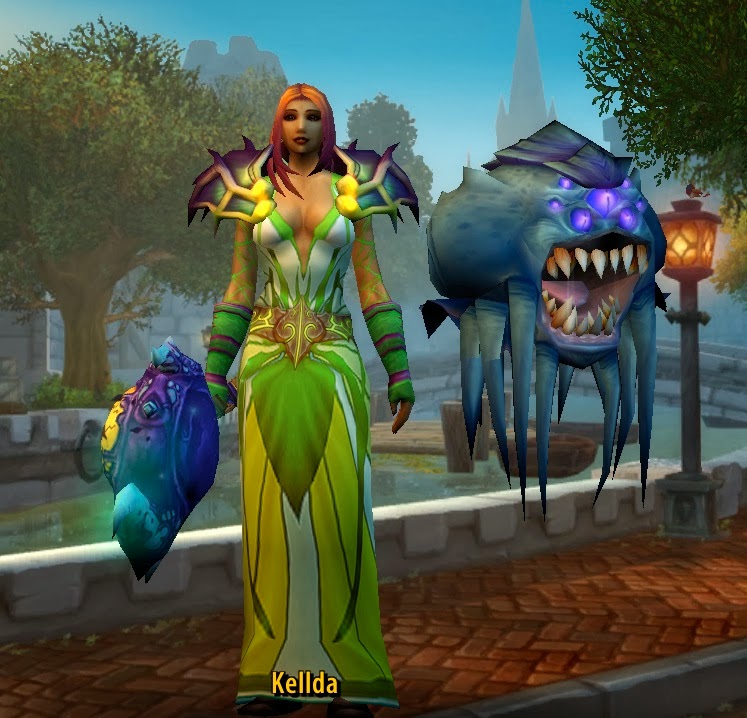 Email ThisBlogThis!Share to TwitterShare to FacebookShare to Pinterest
Labels: drinking with dwarfs