Navimie has a lot on her mind right now: this just shows, again, how completely selfless and generous my sweet friend is: 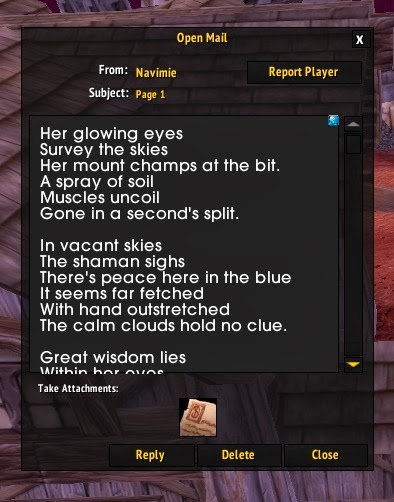 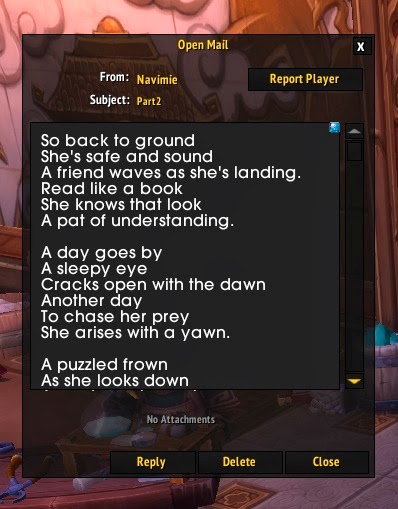 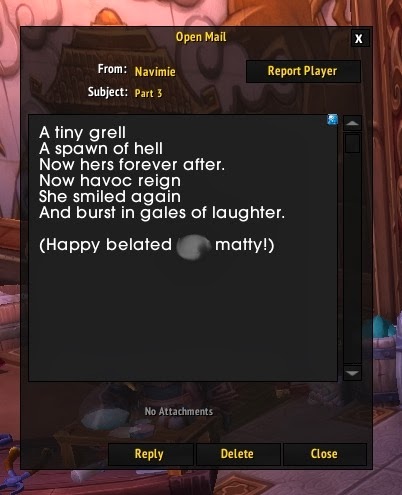 Included in this epic poem was a Gregarious Grell - I named her Navikki. Notice my vanity in rubbing out the number (age). I know you all know how old I am. But in Azeroth I'm always 29….

Now, she had me cracking up laughing: she and I were talking about this on my Tuesday night. The big guild is trying to do 25-mans, and beforehand I asked my GM who he would like me to bring. The conversation I had with him is in keeping with a long-string of 'lost in translation' moments, but I'll write about that later. In any case, I brought the shaman, who is melee, and sat in melee-spew all night:
I just sat back and looked at this mess. I don't know where to run, I don't know how fast to move. Raid awareness goes in the sh*tter for me. But as my favorite guild tank, Hawt,  told me last night while she and I were reflecting on it, "at least I try."

Anyway, what was cracking me up was Navi telling me since the poem was so long she spent so much time trying to kill things for postal money. I could totally relate! Too bad there isn't an account "mail box" where you don't need to go to such lengths to send a piece of mail in game. Gee, I don't know, something like an world-wide server or something. Wonder if such a thing exists. Included in this feat of strength and epic writing, the Gregarious Grell is as cute as can be, and says very odd things:

This seemed too coincidental to be random word soup, so I did some research:
I have yet to play Portal, but have seen its inner workings played by far more leet players than I. And as Tome and I share book suggestions, after finishing Ready Player One, I'd better get my game on. The future depends on it. Nah, the future really depends on what it always has: love.
Posted by Matty at 5:24 AM

Email ThisBlogThis!Share to TwitterShare to FacebookShare to Pinterest
Labels: Navimi is the most generous friend a girl could ever have, Tome and Matty's Excellent Adventure