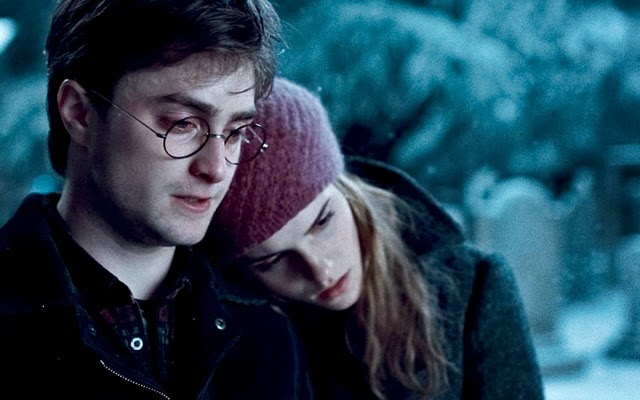 This is not the post I intended-- the ones I did intend will roll off the fingers/keyboard tomorrow, most likely, catching up on #screenshotaday, Year of the Horse, and others, but this caught my eye tonight: 'JK Rowling says Hermione should have married Harry, not Ron.' The article reminded me of a conversation I had with on my of player friends from the beginning, a very intelligent gentleman who loved books and understood the nuances of fan fiction and RP. Rowling's regret is founded, however, because the player felt so strongly about Harry and Hermione, it stuck in my mind. But as someone else brilliantly explained to me, Harry had to become a Weasley: since it couldn't be by blood it had to be by marriage (to Jenny Ginny), though his relationship and both on-screen and literary chemistry fizzled, too subtle to have us, the voyeuristic audience, truly believe in their relationship. Jenny Ginny existed on the peripheral, but then again, perhaps that is where the woman who will be/is the wife of the "one who lived" needed to remain: a domestic retreat of sorts. Well, what's done is done. Perhaps it's more intriguing to feel vindicated that our original instincts for these two fictional potential lovers were spot-on than if she had written the [obvious] relationship outcome.

So--what does this have to do with Azeroth? Two things, I suppose. There is the open adoration I would show you: I hold dear the player friends who have influenced me, made me think, helped me, and been my friends in a space where others don't exist. We have a shorthand communication that doesn't need explaining. If I could do a /slash hold hand, or pick up and hug tightly, and you all could feel it, I would. The limitations on expression obstruct my intentions. Also, unlike JK Rowling's limitations on only 'one' in the end, our characters have their own narratives and interactions. Perhaps this is why we keep coming back, even if we don't admit it. We get to rewrite the ending, erase, edit, start over.

Azeroth is held safe and peaceful...
Posted by Matty at 11:24 PM