Day 6: Chronicles of the Glovebox Gnome: The S-Penultimate Spelunker

Ooh boy, am I wrung OUT! That Irate Mage may start a vacation grumpy, but give her some Harvest Moon Pig Ass Porter, free Wi-Fi, and a soak in a hot tub, and man, that girl melts like a gumdrop in a bacon skillet. She needed that luxury though, let me tell you. Yesterday the druids and the rogue discussed how awesome everything had been going, and decided not to push their luck and start heading home a day early. Mage, though having a wonderful time, gussying up for geysers and frolicking with fumaroles, agreed it was time to head back to civilization. It was unanimous. Me? Well I didn't get a vote since no one else saw me but her. The only thing though...the only thing...she had one request, and that was to go to the Lewis & Clark Caverns.  There is something...kind of...gee, I don't know....I feel like...a long lost memory.... 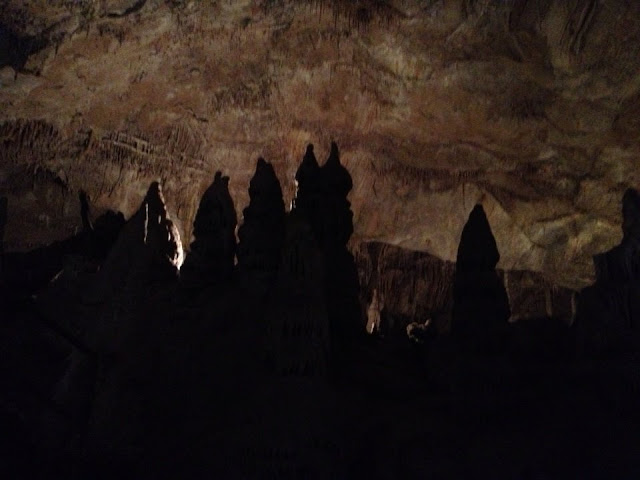 Anyway, she insisted they go, and since every one else had gotten what they had wanted out of the trip, they indulged her. Checking out of the lodge a day early drew a Norman Bate's-esque creep factor +30 response from the front desk clerk, however: "Onto bigger and better things, I suppose....." he said in a voice that would chill Y'Shaarj.  Something about him made her think: "Inside that little man is a warlock. And not a nice one." Creepy. Oh well--off to Lewis & Clark, then Missoula, then home the next day!

So away from the elk, the bison, and geysers, goodbye bears-not-seen, goodbye! Goodbye! By the time they reached the National Park site, they were all tired. They paid for their pass, went down the road where tours gathered, paid their fee, and got in on the next tour. Little did Irate Mage know that the caverns were basically a big, mile + long hole inside of a MOUNTAIN! One has to traverse-trek up a steep switchback trail in order to gain access to the entrance. And rip off alert! It was only named after Lewis & Clark because Teddy Roosevelt named everything after them.* The entrance to this magnificent experience was actually discovered by two farmers when they saw smoke coming out of the side of the mountain. Going to investigate, they found the entrance and told their buddy Dan Morrison about it.  Right about now I'm wishing I was Sarah Vowell and could write about history in an engaging and humorous way, but alas, I am not. But L&C don't get the credit for this one, not even Sacagawea. Dan is the man for keeping the caverns accessible.

Accessible? Maybe for a gnome-sized gnomey-gnome like me, but for big-tailed Mage, well...

The cynical tour guide (thank God for cynical tour guides) stopped the tour at one point and pointed to a big rock. The rock was named "Decision Rock" because if one goes forward, there is no turning back, and he informed the group that yes, there was ONE narrow passageway. I am calling the bison-shit card on this one. There were about ten: at one point there is what is known as the 'butt slide.' The limestone is so worn by the butt cheeks of 100+ years it is worn into two distinct sluices. She was happy to have a little tail cushioning because it prevented her from sliding down too fast. The tour was great, and she really enjoyed flexing, folding, moving, bending, and twisting around the nooks and crannies of the cave. And it was a long, long way down. It wouldn't have been so bad but there was a family in the group: mom, wearing a pretty jean dress, a toddler girl, and three other elementary school aged children, a grandpa, and grandma. Again, husband? Where is El Patron? The "Who's Your Daddy?" The Papa Bear of the brood to for the love of all that is holy take that toddler to the car! The Irate Mage had wanted to be last in the tour group, to allow for all children (and there were many) to go ahead, yet the young mother confesses at Decision Rock that not only does she have a cranky toddler in tow, but she is claustrophobic, and wants to be last. And my own sense of foreboding kept growing...

Sure enough, we go down, down, down, deeper and deeper, and we get to the showcase of the place, the Paradise Room. And there, to my horror:

I fear it may be my long-lost relatives, a few gnomes who went off to search for riches and glory in the Old West and ended up forever frozen in time, staring at legions of humid tourists who were told to take a sweater, bottle of water, and comfortable shoes. Bat guano a bonus. Oh well, nothing I can do for them now.

The Rogue, Druids, and Irate Mage will be home late tomorrow. Mage has a great idea for a Blog Azeroth topic about all the spelunking and caves in Azeroth -- think of how we all feel about them. The caverns not only are caves, but they felt very dungeon-like too. This formation reminded her of skeletal remains: 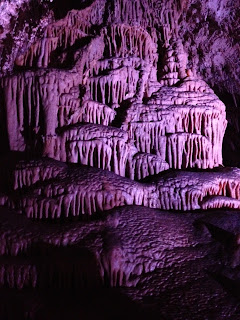 There's a story in there somewhere, she just knows it. She can feel it in her bones. Oh wait, maybe that was just a stuck stalagmite.

Editor's Note: CD Rogue told a tale before the caves of a family trip in his past where there were Ice Caves somewhere in Idaho. When he and his brother finally wore his dad down and they stopped, sure enough there were ice caves, and the good owners of the caves had the creativity and imagination to stash the entire place with garden gnomes. I remember as a very little girl going on some cavern tour that has fairyland creatures in it, and got very scared, and some nice man let me ride on his shoulders, and I think I ended up bumping my head. So, blood, darkness, and Little Bo Peep are somehow inescapably tied up in a knot for me. Not sure how to frame the Blog Azeroth idea -- if any of my blogging buddies want to give it shot, go for it.

PS I would still be in that hot tub too if the hotel didn't shut it off and turn off the lights. /sigh

*We could use a few more things named after Sacajawea, in my opinion. That girl rocked.
Posted by Matty at 11:10 PM