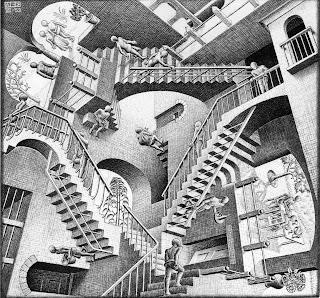 While I was busy cavorting with caverns, many in-depth bloggers weighed in on the leveling question. I'll get to that in a minute, but here is Bear's first one, and follow-up, and Tome's, and Matticus'. I thought the question may have been misplaced, or perhaps there is another consideration about leveling: it's not the pace, it's the "birth order" if you will. Each character has begun, or been deleted, changed, moved, etc. for unique reasons. So perhaps the better question is, "why did you start this character in the first place?"

Matticus started a series of "Behind the Scenes" about bloggers he admires, sort of a 'who's who' behind the keyboard when the keys aren't being used to lightning bolt lightning bolt. This made me think of a few things, one is -- what the hell am I doing, and why does anyone even stop by this blog? No, don't get me wrong - I'm not challenging you to stay away, I love you guys. I'm sure Navi has long decided I'm TL:DR (I am) and I may have annoyed a few folks, too. I don't have any good advice on WoW, I don't know how to level pets, or find fish, or down heroic raid bosses, or heck, I don't even know how to function in a guild with more than three people! I am going to have to slash-and-burn my computer over the next week, and start all over again, wiping everything clean, my game mouse was handed over years ago to young leet druid, more often than not there is a stack of bills staring at me while I ignore them and stare at Azuremyst, and I'm not all that friendly. During our trip, my sister-in-law, who is an extremophile introvert, was shocked, and not in any way kidding, when I told her I needed to be by myself at times. She assumed, and blatantly told me, that she thought with my job, personality, etc. that I "feed" off of other people.

No. If anything, at times I'm the one who's scraping off the barnacles and swimming for that rock to hide under. That's how I give energy and time back, when I can recharge. Did she imagine my big personality standing in the center of the three-ring circus 24/7, just waiting for each new audience, never once taking a bathroom break or plucking my eyebrows? Guess not. Interesting: there have been many times this past year or two I've described my life as "fish bowl," floating poop and all.

This made me wonder about all the misconceptions between introverts/extroverts, but I'll ponder that another time. My brother-in-law brought up an interesting personality test, the DISC. He uses this to make necessary snap judgments. He immediately said I am a strong "D" - dominance and "I" - influence. Rarely am I conscientious about things (this is where CD Rogue and I differ, and yes, it does cause some friction, but the C's are vital to getting things done right; the "Ds" such as myself are vital to getting them done at all). The thing my bro-in-law said about "Ds" that really struck home was "they are comfortable with anger."

Wonder how this applies to guild management? If a raid team has a house of "Ds" but needs some "Ss" - that would be an interesting guild recruitment ad:


"The Freudians" seeking talented raiders, IL 566+, experienced 12/12, only C (conscientious/compliance) players who follow rules and plan everything, RL is a "D" and will make all decisions, no "I" players wanted (no drama) and one shammy/druid healer "S" to keep things stable.

The thing is--I create most of my own obstacles. Pathologically I create things that seem like they're stopping me from doing whatever it is supposedly I proclaim is important to me. For example, CD Rogue and I had a disagreement over space: he has it, I don't. Well, I do, but it's more public, and I always have to "just ask" if I want privacy, quiet, or time to collect my thoughts, or even just play WoW has loudly as I want. He'll say, "You were just playing your game, so I didn't think blasting David Letterman from the next room was a big deal." And then when I tell him he never has to make that choice, I am the petty one, but he does emphasize that he'll do whatever I ask. I just don't want to have to ask, because asking leads to demanding, and demanding leads to bad publicity. So, up early in the morning am I, said in my Yoda voice. Where's Mrs. Yoda, I wonder? Did she take the tadpoles and move to Wisconsin to work as a university professor of early Tatooine literature? Point: I should just shut up and write, move, go to the library, whatever. Maybe Mrs. Yoda can meet me for tea.


What were you talking about?

So, back to the question: Do I think leveling is too easy?

Answer: Yes and no. The leveling is dependent upon the motivations for the game character.

Sometimes I use the Remote App for WoW. I say sometimes because it is damn distracting. Its greatest features are the screenshots it takes of characters, and the remote auction house. I can blindly post things to the AH without all that nagging, "I might need this someday" angst. 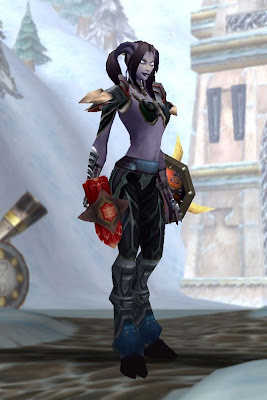 Luperci the Brave, the Beautiful, the Broken. I worked so very, very hard on her in Cataclysm. Tanking through every nerd-raging, angry, bored player, learning every nuance of every dungeon. Too afraid and intimidated to learn to tank through raids, somehow I never found the guild/group who was going to be patient with me while I learned. I remember making a mistake once and being told "YOU WIPED THE RAID!" but with the male tanks, the patience levels were much higher: "That's okay, try again, you do this, okay?" Forget the scantily-clad gear: the real sexism is far more subtle than size 40-DD breastplates. Somehow, knowing what I am doing when I am in charge of children, car repairs, bill paying, yard and house maintenance is fine, but God help me if I don't turn a boss the right way once. Suffice it to say, Lupe has been on the shelf this expansion. She is a lost soul. Of all the ways to level, raising a tank is probably the hardest. I would say that I don't have the time, but like eating right and exercise, if I really WANTED to find the time, I would for her. The only person who had patience with me was my friend Turk, and for that I want to thank him. He helped me get through the Zuls, and understand more of the intricacies of tanking, though he himself doesn't have a paladin - he does however know his stuff, and this game, very well.

I have always felt though, that it doesn't have to be "hard." At least not emotionally. I have wished for simulations of raids, etc. where I can get my hands on a character and test things out. Not training dummies, and not by watching other videos, but a proving ground of sorts. What? What did you say?! Maybe my wish came true?!

So who am I? Will a Matticus ever be interested in interviewing someone like me? Probably not, and that's a good thing. I get to spill my inner purse contents all over the floor on this blog, sort through it, and have some time to think. It's my Play-Doh. I wish I could offer more game advice, but alas, that is not my area of expertise. I am the Queen of Half-Done Projects and Wishful Thinking. Fact is, I love playing WoW, and I have a great life, real and imaginary. Welcome to my mushroom: take a tiny bite and enjoy the trip.*

Postscript: I considered putting a picture of myself that CD Rogue took on our trip. But real photos are deceiving. Many of my friends and family on Facebook made fun of me, cause I'm wearing CD Rogue's hat that could be mistaken for a park ranger hat; my nose is its Scottish-German lumpiness, my eyes a little squinty, and I look kind of tough. My dad said I looked beautiful but with my inner determination. My husband thinks I'm beautiful (unless I'm asking for something), so I guess beauty is truly in the eye of the beholder, and situational. We can't control how others see us; we can barely manage our own inner mirrors.

Expulsion is the only answer...haha!

Email ThisBlogThis!Share to TwitterShare to FacebookShare to Pinterest
Labels: Big Bear Butt is the Greatest Blogger Ever, Luperci is not a fail tank, Matticus, Proving grounds, Tome of the Ancient