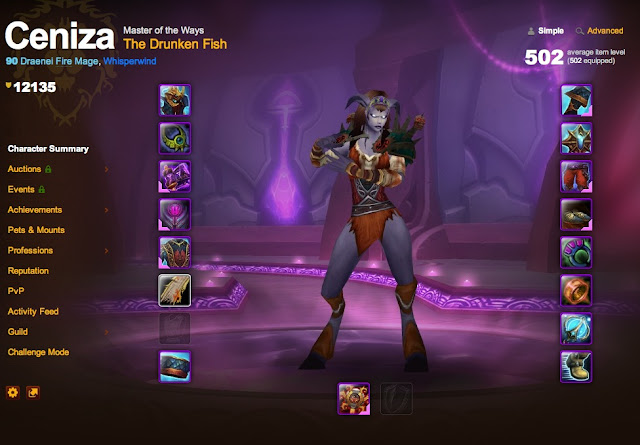 Why can't I shake the feeling that I'm always, always running behind in Azeroth now? I appreciate Blizzard putting the new content on a faster conveyor belt, but I do feel behind, constantly. Cue soundtrack of Carl Stalling's Powerhouse.

Last night I was staring at my characters, and though they have much to do in game, "they" all felt paralyzingly restless. I told Navimie that the feeling I had was like a boyfriend had just broken up with me and all I could do was find a spoon and a pint of Häagen-Dazs. (The 'boyfriend' is metaphorically my current engagement with projects, or lack thereof; spoon and ice cream symbolizing temporary cures.) Well, to be completely honest, it would not be Häagen-Daz, but perhaps Ben & Jerry's Cherry Garcia, Chunky Monkey, or Chubby Hubby. But that's a detail you really didn't need to know. Pistachio gelato is my all-time favorite, probably because it's difficult to get, and no one else likes it but me. Anyway -- damn, where was I? Oh yes. That feeling that something is broken, or a path turned a different way, and the next way isn't clear yet. So what else is a girl to do? Why, play your mage of course! Irate Mage decided to finish up her Master of the Ways title, gold be damned! Juicy carrots at market premium because of a frost in the Jade Forest, and between fishing, putting items in the pantry, etc. she spent -well--too much--but she's good for it! Swear! A Draenei always pays her debts. The thought of farming for myself again was so crippling boring, I just could not do it. Sometimes ya just gotta throw gold at a problem.

Anyway, so 5.4 is just around the corner. Here is all I know about it, and there are spoilers:

Speaking of throwing gold at a problem, my Mary Kay rep caught up with me recently; she has a preternatural ability to know exactly when the cleansers and mascara run dry. Whether or not these skin care products and elixirs hold back the ravages of time, I do not know. But it smells good and makes me feel pretty, albeit temporarily. Off to the ice cream shop...back in a bit. Temporary joys are better than nothing at all, right?

And men: eat breakfast! It's good for your hearts!

Email ThisBlogThis!Share to TwitterShare to FacebookShare to Pinterest
Labels: Master of the Pots and Pans