That poor little baby shammy! Man did she get saddled with a lot lately: saving tadpole murlocs, saving my love of shamans, reading bedtime stories to orphans, and now she's in charge of getting the Netherwing mounts:

Yes, that's our lovely Dornaa, disguised as an orc, taking orders from Overlord Mor'ghor. Young leet druid looked over my shoulder and suggested I should be doing this on one of my level 90s, that it would take a long time to get exalted. As far as time efficiency is concerned, he's right; however, as far as having a new challenge goes, no. I researched these drakes and knew first I would have to get Dornaa to not only level 70 to get the first quest from Mordenai (who kind of breaks my heart a little bit - not sure why) and since I am really enjoying seeing the world through Dornaa's eyes, it seemed natural that she should do this very old content like it was new. To me, it is.

I do appreciate 'sure things;' the reputation grinds that will lead to something worthwhile--the Winterspring cubs, the factions with their stables of mounts, even the Twilight drake drops like a blue gumball in an all-blue gumball dispenser. I tried to borrow some of the luck Tome was having the other day and see if I could get the Swift White Hawkstrider and took six of the girls to Quel'Danas for picnics with Husks and fried chicken, but alas, no White Strider for me. But an interesting thing happened on the way to Kael'thas' chicken coop: only Momokawa could get all the mana wyrms in a near-perfect circle -- all the others made a big mess of mana guts all over the place. Must be a druid thing: 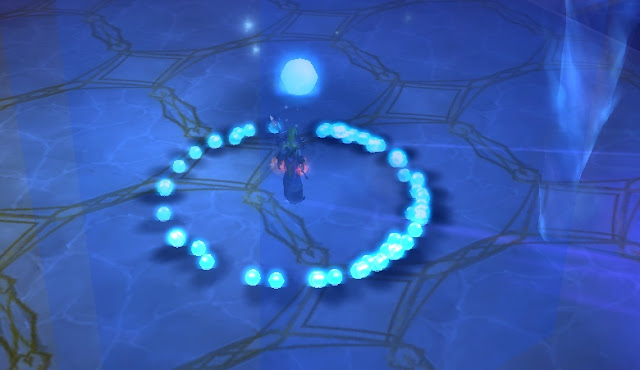 So off I go, hunting for dragon eggs and talking to orcs and goblins. Ah, the things I do for love.

These lyrics are silly - but I love the comment from the young lady, "like even though it's from 2009' - yeah, we can't like songs older than five minutes!
Posted by Matty at 7:46 AM