If I ever lamented about not starting to play WoW back in Vanilla, or Burning Crusade, no more. In fact, ye experienced players may want to check your envy of moi. Take last night for example. Young Druid wants to go into Black Temple. The epic battle between Illidan is truly between him and his inner demons, but that is a story you are all familiar with, but I still have some research to do.

I love the Black Temple. It is darkly foreboding, rich, and subtly unnerving. And—please don’t laugh—the Reliquary of Souls—is masterful. I have yet to conquer Desire with less than four players. And these players are no slouches. But Desire has overcome us more than once. We need to wake up sleepyheads for a fourth every time. Last night we had five, so it was easy to overcome Desire (but not as challenging). She is the one, the ultimate villain in my estimation, spinning us around, making us silent, devastated, and helpless. Desire does that. Just ask Buddha. (And I don’t care what wowwiki says, “All spells used by EoD can be interrupted, reflected or spell stolen." Desire is one mean sin.

Now, yesterday, these really intriguing shoulders dropped, and I regretted for a moment not bringing Miss Matty-Shaman-Mail-Pants. These shoulders have two big-googly eyeballs on them! Eyeballs! Googly eyeballs! That is so cool! But alas, Zeptepi Cloth-Butt was there, healing and trying to keep up, because there were so many shiny-pretty things everywhere. Young Druid is not interested in picking up loose change off of the ground.

During the Illidari Council portion, shoulder tokens dropped. I almost, almost didn’t pick them up. The passing glance, and full bags, considering that the chest piece was kind of plain, made me think that the shoulders would also be plain too, I guess.

But, I did turn back, and grab the token, and I am glad I did. Lady Fortuna and Justitia, my gratitude, for I believe this mantle is exquisitely designed:

Perhaps I almost passed it up because when I acquired the chest piece, the other pieces seemed formal but plain. If only I had taken a closer look, but then…perhaps…I would have been filled with desire, and the token would have been snatched from my grasp, because as we all know, the Random Number Gods like to have their fun, too.

Desire seemed to be going around that run, too. A Death Knight, some sell-sword off the street, bragged that he could run all of Black Temple in Blood. He boasted of weapons owned, and status gained. But, he repeatedly needed on all gems, and weapons, until the Druid leader had had enough. “Give the mace to the paladin,” and he reluctantly obliged, but not without a litany of rationalizations. I missed this whole drama in raid chat, and only found out until later in the evening, long after the run was over, the Druid had to kick young errant Death Knight, citing, “Bad sportsmanship and lying.”  Misdeamors in most regions, but punishable by expulsion in transmog runs, and don’t you forget it.

Stupid me: I noticed he wasn’t there for the Illidan-smack-down, but didn’t ask, I just assumed he had to go. The moral of that story is don’t mess with righteous young Druids. You break the law, you will serve your time.

Now, the blue mace dropped, and I had wanted it to match the blue theme on Zep. Druid wanted it too, so I weighed out the cost-benefit analysis of giving the mace to the Druid, and determined this would be the better way to go, for my own reasons. Besides, he informed me that there was a similar one in Netherstorm from the Honor Point vendor. I had not idea this vendor was there (hearken back to I never played in Outlands that much and it’s like a whole new world). Sure enough, one quick battleground victory later, and the mace was mine. It’s black, not blue, but that’s all right. It goes with my outfit, too.

Back to the benefits of rediscovering Outlands: Zep is currently gathering her red hat, shoes, and goggles to go with her new red mace. She’s going for a whole Melisandre look: 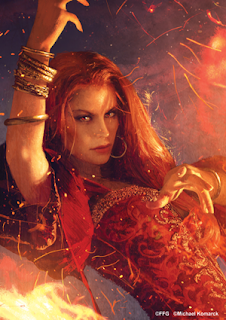 I am sure Matty did most of these, helping out the space goblins in Netherstorm, because one does not forget easily the smell memory of cold electric crystals and burnt mana. Cen recently obtained those funky shoes, but will continue for a few more things, too. I feel like I'm a little girl again, playing with my mom's old prom dresses and ball gowns. You just never know what treasures you'll find!