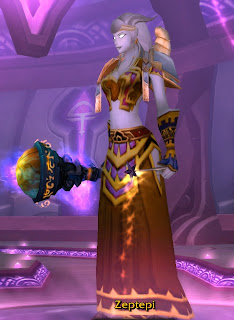 So much for going into LFR today. 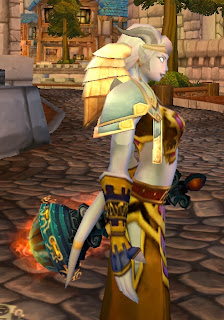 Turns out I know random people randomly who do random things. First, off to help Jaina out and got my Lucky Old Sun mace for Zep. Fifth tries the charm, so they say!


Then, thought, hey! I've been wanting those Wings of the Avatar, rounded up some willing victims volunteers, and got them!

Couldn't talk anyone into the Hood, but maybe some other afternoon, so I can get my white album set. In the meantime, put this outfit together with Greco/Roman influences moving with a hint of Pagan and New World Order thrown in for good measure. 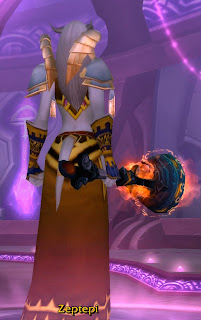 Now, there were a few other things to do, too: Oh yes. Wanted to talk about time. One fact of my world is I cannot or should not stay up too late. I must wake up very early (and I didn't even marry the dairy farmer, and have no cows to milk). Most folks I know who raid regularly are night owls, and those that have to bow out of regular raiding usually come to the hard reality that they're not in college anymore and can burn lots of candles at both ends, and do shots in the meantime. I keep reminding myself of this whenever I start to steer toward the Cliffs of Insanity and think about trying to raid (still? again? not sure--wasn't much good at it the first go-round). Then, the circular thinking goes back to: then why am I keeping up on good gear, valor points, and all for three demanding WoW characters? There can only be one princess at the ball, only one can go and be prom queen, only one highlander, right? I don't know.

The abritary structure of a day, or at least some ground rules I plan on setting for myself, do not include raiding. Nothing demanding on Sunday nights, nothing past 9PM on weekdays, and devote a few hours for just writing/other creative pursuits on the weekends. The funny friend who helped me get these wings today and I were talking about the trials/tribulations of big versus little guilds, because the little guilds get no love from Blizz. Like a small business owner being overrun by the big corporations, and it is a complaint of mine. I understand the rationale for the big guilds getting their grand perks, but seriously, all I want is to be able to summon and mass rez. Both of those help the social fabric of the game be more enjoyable for all. And, now I am going to sound grumpy, but even in my nice new guild, the nerd dialogue gets a bit weary. I swear the sense of deja vü in my new big guild versus my old big guild is disorienting. At this point in my thesis, I am going to summon my awesome powers of self-editing and shut up, and not write about all of the stereotypes or generalities of the flirtatious player, the nerd-rager, the smug officer, over-enthusiastic newcomer or disinterested, or jaded, B-team wannabes (me?).

Point being: I like my little guild with my buddy. He's funny, doesn't talk too much, and we respect each other's time. He's the friend that I would probably go down to the 7-11 and buy Slurpees and play hacky-sack with all day, back in my "I can buy Slurpees and Play Hacky-Sack All Day" days.

Talk about living the dream.

Email ThisBlogThis!Share to TwitterShare to FacebookShare to Pinterest
Labels: transmorgrification nation, where does all the gold go?, Zeptepi