ShPin the Bottle: Drinking and Dungeoning


Trying to get Flirting with Disaster pretty much summed up the whole mixed bag yesterday.


Well, actually, it was a pretty good day. Except---

I am my own worst enemy sometimes. Long story short: I went into LFR (Part II/Deathwing*) on Zep, and won both the helm and leg tokens. In my impulsive state of mind, gave leg tokens away.

The only insight I can give you dear readers, was I really wanted any weapons that dropped and was making a deal. The person with whom I made the helm deal took the staff, and I won the mace anyway, so the leggings deal fell through. It was only until hours later when I was looking at the above picture did I realize what I had done. The other piece of analysis is, as I have told both bosses and others, is that the two sides of my "get it done" coin are: Heads: Win for the Hard Work Ethic/Tails: Do Things WAY too impulsively. When I was about seven or eight, I jumped off a dock into the shallow part of the lake, breaking my foot. Thank the stars it was only my foot, because it could have been much worse. When I told my esteemed guildmate he was so sweet, just saying I would get them again. Perhaps.

I went into the Wyrmrest one with my rogue buddy, and thank goodness he was there.  I can still heal the snot out of stuff (Part I/Wyrmrest)It was a tough one. The DPS was very, very low, and every time I requested warlock candy (crack for priest healers, in my opinion) or a mage table, was met with blank stares. It was until I pitched a hissy fit and begged before the Hagara fight did the warlock put out some rocks. When I said something funny, Solitare said something to the effect that my healing spells were crack. 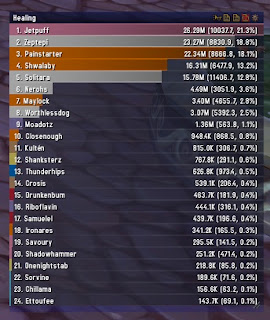 Not sure why he/she felt it necessary to disparage my healing skills when performed as such.

So, no legs, new mace (with no spirit: will be visiting Mr. Robot soon), no achieve with Sraaz (oh, little man, you are mine...all mine!)

Let's get a sum total:

+Mace
-No Legs
-Impulisivity rules the day
-No Flirting With Disaster (and it's so damn easy)
+Cake Vodka Martini (win!)
+Fun with some friends (nod to cat who took my mount keys)
=Balanced

Oh, and I put together a blue/violet look for Zep. Now she's pretty: 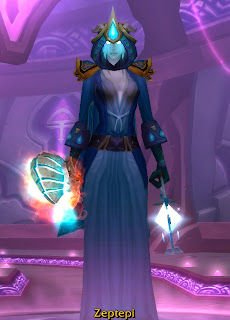 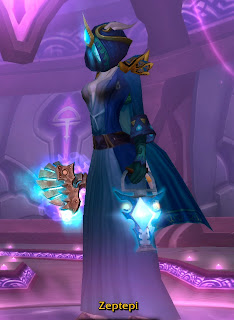 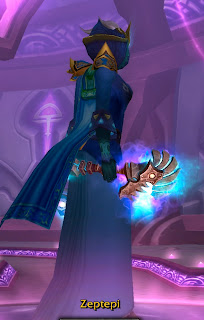 NEWS FLASH: One VERY good thing, but it may be too little, too late, is that we CAN get Grisly Trophies and Hearts at the same time! I was in a dungeon and it showed up on the loot rolls or whatever that the priest was getting both, so I hustled down to the fair and picked up with Strength quest.

And, one more defensive statement: Having three main characters just made me snap from an organizational standpoint. So, to the sticky notes! Reminder: LOOK AT YOUR GEAR STUPID
Posted by Matty at 7:54 AM