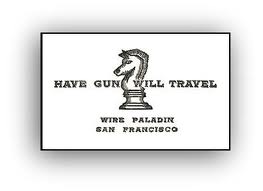 My colleague is a singer, and has a lovely voice. She is also a true nerd/geek/dork. Her daughter (age 11) has plans to marry Dr. Who.*I am not joking.** The point is, she bursts out in random songs, and one is from the television show "Have Gun, Will Travel," which goes something like this:

She was singing the first few bars today, and having one of our helpful hallway conversations, and I told her every time she pipes in with that theme, it reminds me of great paladins I have known, and how my current paladin, Luperci, is feeling a bit spooked right now. I am over the stink-eye shaman, but it made for a good laugh, because when I related my story of why poor Lupe is making so many rookie mistakes now, we thought of those people in our lives who do the same things to us. We know of one young man who told the nicest of people FU MISS ______ like he was saying "Howdy. Somewhat a common occurrence, though: call it an occupational hazard.

Which led us to this: What is you could create characters with amalgamations of people's names whom we love to hate?

Charles Dickens was a master of this, as of course, Shakespeare. Naming characters as their natures is a great literary device that helps bring the character more to life.

Think about this, and get back to me. For the young man who is the chaos creator, we decided he would be an orc warrior, stomping around, and be named "Mikillaria." Only funny if you know him.

See? Once in a while I get to 'speak geek' with my colleagues.

*The eleventh incarnation, not the old one.
**Her sweet little boy piped in, while she was singing this in the car, "Mommy, you know a paladin is a holy warrior." Yup, she knew.

Email ThisBlogThis!Share to TwitterShare to FacebookShare to Pinterest
Labels: I can't hear your geek, Luperci is not a fail tank, paladin