Once again some things converged.

This past week, I finished Terry Pratchett's Wee Free Men.  Aside from having this overwhelming, 'where have you been all my life' feeling about Terry Pratchett, there is a repeated term the Nac Macs use, "kelda." Using my lofty powers of context clues, I figured out it must mean a witch, or queen. Or Witch Queen.

It is an absolutely, completely, charming book. My paperback copy is now chock-full of annotations and highlight quotes (Kindle was left at home). 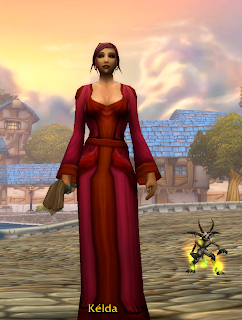 So, being the clever witch I am, thought I would make a character named Kelda. Not that there aren't already 32 million Terry Pratchett fans out there, it was somewhat original, right?

Silly witch. Literary references are for smart players. There are 219 Keldas listed in the armory. But see, I know how to make funny typography, and made a Kélda. There are three of us.

And then, I met this Kelda: 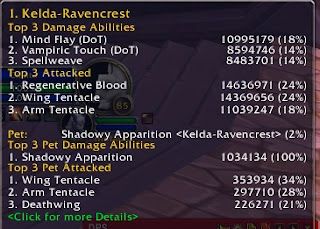 Damn. Probably should have rolled another priest. Not quite sure why Kelda was slumming it in an LFR, but hey, even shadow priests need valor points, too, I suppose.

On a completely different note, Momo's coming along fine. Waiting to get done with her heirlooms so she can hand them over to Kélda. While in Utgarde (still laugh over friend's comment that every time Ingvar dies, an angel gets her wings) she noticed some things:


Was lamenting to Guarf that I wish "Matty" could get some tats. She would love nothing more than to go native with the Vykruls. He commented that in his opinion, that should have been the next race. Agreed. Maybe not replacing worgens or pandas, but it sure would have been cool. As Guarf would say, "Just sayin'."