Got skills? Apparently not. 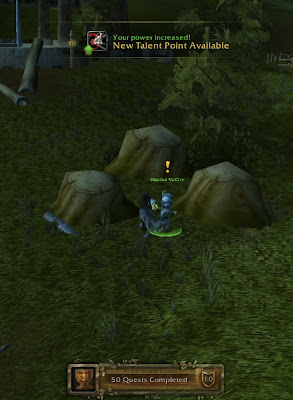 I wish I had better news. I wish I didn't have a teeny-tiny hangover from two big-gulp sized Grey Goose dirty martinis. I wish I had gotten more sleep. What I wanted to report this morning was a surprise, that my latest Ironman project had reached level 15 safe and sound, but alas...not meant to be.


Hachette and Lapinou, her wolf, had risen the ranks through thick and thin, with one narrow escape in Westfall and otherwise, enjoying a certain amount of pride, and yes, actual enjoyment of trying to figure out what to do in order to make enough coin to even train properly. "She" even took some eggs to market and made some pocket change. And her wolf? A more loyal, spunky, and brave pet one has ever known. Lapinou is a French pet-name which roughly translates to 'little bunny rabbit,' a cute name a parent might affectionately call a child.


Ah, but again, the heroine's hubris is her downfall. With a clown to the left of me, and a joker to the right, she succumbed to the fast-spawning murloc population along the sandy shores of Westfall, and then proceeded to run into countless packs of Riverpaws. Both Hachette and Lapinou were overcome, and there is the health bar depleting faster than hope that gas prices will ever go down. And while I give the report of this latest catastrophe to the sweet joker to my right, he says, "You know, you just don't have to be good at everything in WoW." I can't quite describe his tone, but it was sweet, and caused a minor epiphany on my part. I am not good at anything in WoW! I report this to the clown to my left, in this conversation:

Now, the joker to the right was right. He observed that each time my character dies during an Ironman is when I lose focus. I'm talking, the television is on, and there may be a martini present. He wasn't being mean, not at all, simply stating a truth. And his second observation is also true--as is my friend's. I am a good friend, which is probably why Azeroth has lost some of its flavor of late. Guarf is still doing whatever it is Guarf does. There is a very annoying scroll of resurrection that I refuse to click on due to principles. Finally, I keep resisting the urge to whisper folks looking "to build their raid teams." I just don't want to be yelled at anymore by a 20-something. Go figure. But--again, I am truly blessed. I do have the joker, and the clown (just kidding, guys!) and many others in and out of Azeroth whom I love, adore, and get to hug, with typed words or real arms. And I bet if I ask nicely, I can even get some aspirin for this hangover.
Now -- do I continue with Hachette in regular Ironman (don't you get to die in that one, just none of the other buffs/talents?) or start again? Or, Plan C, just continue with her going full-bore, all the goodies, gold and glory? Not sure where that leave poor Haanta, with another hunter in the house. But there is something to be said for fresh starts, but I'm not sure where the mark is. Maybe I had better figure that out before I do "ready, set."
For now, au revoir mon cher et être bien, Hachette.
Posted by Matty at 7:16 AM