Know Your Archetype: The Anti-Hero 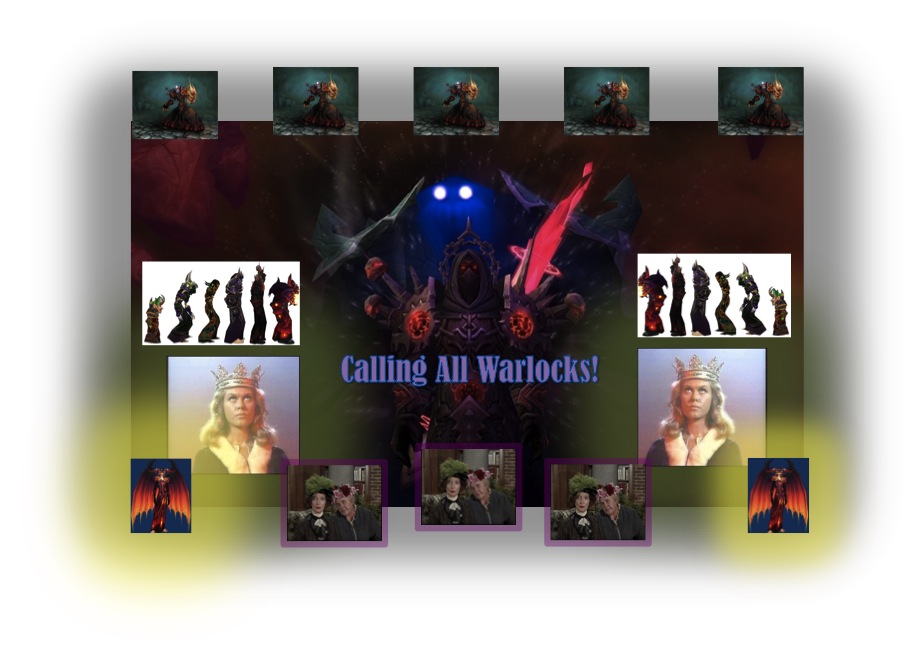 Don't know why I am concerned about the disappearance, the endangered species if you will, of Warlocks in Azeroth. This worry inspired me to put together this collage of Locks, a call to action, a recruitment poster, or base propaganda and pandering. No matter.

Cynwise has taken the extremely scientific and meta-analysis approach; Tome, and Godmother, the more qualitative analysis, and me, well, I mess around with .jpgs for a while in stead of doing the dishes. Spooky, I know. But with all the chatter, keep in mind there are big changes coming to Warlocks in the new expansion, and their specializations are some of the most complex and difficult to master, as well as having a very challenging lore. They are the anti-heroes of the game. Anti-heroes are the heroes we love to hate. They are not perfect. They never become perfect. Apotheosis? Bah. Rather smoke a cigarette and drink Scotch than turn all squeaky-clean Boy Scout. They are the protagonist, but with an antagonistic edge. I was going to write that my impression is that rogues fall in this category, too, and then found this on Wikipedia:

O MalandroA typical kind of Brazilian stock character who is often depicted as a trickster who lies, steals, and has little qualms about manipulating even his best friends. Despite this rather negative and villainous attitude, the malandro is often depicted as a hero because, in contrast to his methods, he does not use his cunningness for true harm and malice. Rather, he uses it to prevail against the adversity that surrounds the character, and his actions may actually have positive effects on the others, even if unintended, thus making him a sort of Lovable rogue.

Warlocks, well, I need to do some further study on these elusive, mysterious heroes. I start warlocks all the time, but never finish them. While reading Game of Thrones, I started one named Hallyne for the alchemist creeps who made the wildfire that sets all ablaze with eternal toxic poisons. Every time I play with a warlock I feel spun around, and a bit bewitched. I can't really tell if that green stuff is a good or bad thing, or if I should call a medic. And let's not forget poor Escarlata, who is well, not a nice girl, dead or alive.

So, go to your local server slot today and rescue a lost or abandoned warlock. Locks need love, too.