Once in a job interview I was accused of being "flip and irreverent." I thought I was being charming and engaging, but to each his own. I am not trying to be flip, or charming, actually, but need to share this moment.

Last night, very, very late, around 1AM, I had to go pick someone up. Nothing bad, all good, but these are promises I have made, and had miles to go before I could sleep. I was feeling a bit surreal, just a touch, and put on NPR, and fortunately, the good British voices of the BBC were soothing. There was a story about the devastating impact of the Christchurch, New Zealand earthquake from a year ago, and a government/religious official (Bishop Victoria Matthews) was relaying the terrible decision that they did not plan on rebuilding this monument in its original form.

And then...there was a wizard.

Yes. New Zealand has a wizard. I should say, a Wizard.

Well, why am I surprised? They have hobbits, bats, and Peter Jacksons, too. 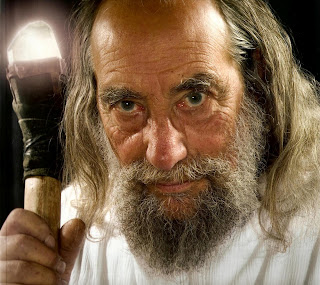 Now this is where you are going to think I am being flip, and again, I am not.  I am sad. The last major earthquake here in the Seattle area really only further damaged the Alaskan Way Viaduct, which was already in disrepair and an infrastructural eyesore. I am not comparing the cathedral to a Seattle highway.I can't imagine what it would be like if the Space Needle fell, or even the Smith Tower. The Smith Tower is a feature on the Seattle Underground Tour as one of the highest buildings west of the Mississippi back in the day. What strikes me as major irony is that the Smith Tower, of typewriter fame, paved the way for other big tech companies, Microsoft of course immediately comes to mind.

(Please remember: this is around 2AM now when I was formulating these thoughts, forgive me.)

Straight up: the U.S. has many wonderful things. But we do not have a Wizard spokesman.

And the cathedral needs to be rebuilt. There is the technology that can rebuild it to withstand more earthquakes, because as those of us know in the Ring of Fire, and no, not the Johnny Cash song, but a true geological zone of bumps, shocks, and jarring land movements, earthquakes are inevitable.

Anyway, if you're interested, here is a link: http://www.christchurchcathedral.co.nz/Rebuild

There are strange things afoot, ladies and gentlemen, and yes, some of them happen at two in the morning.

If the Space Needle falls, I'll be asking for help, too, 'cause we are short wizards around these parts. Wars between Bishops and Wizards exist, and for that, it is a remarkable world indeed.
Posted by Matty at 7:34 PM

Email ThisBlogThis!Share to TwitterShare to FacebookShare to Pinterest
Labels: Things that have nothing to do with WoW