Trips down memory lane have their potholes.

Recently, like this week, had a lengthy debate with cross-dressing rogue about this article he sent me:

It is a long article, but has some deep implications. Can anyone say "repression?"

Worth a read, for sure. There won't be a test on it, so you're safe.

Memory is a tricky thing. One main reason I write is for the plasticity of memory, and to mold an event, or my recollection of it, into something that becomes an observable portrait.

I went through my stats today, too, and came back with the two most important ones: 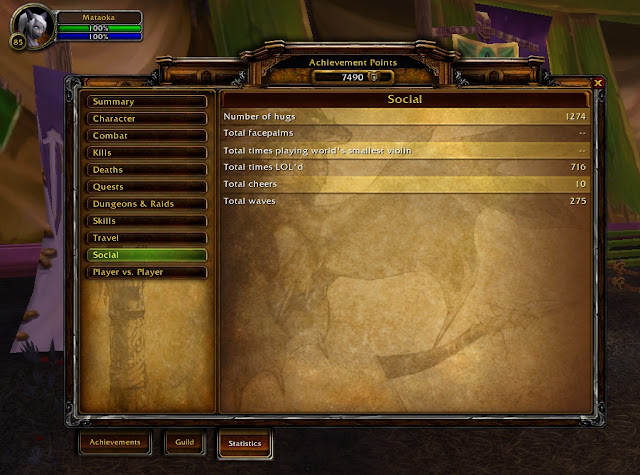 Never have I given someone a 'facepalm' or played a small violin for them.

Now that is something to be proud of.

One tiny, teeny rant:
Needed just two more runs to cap out Zep's VP this week. That's it. Just two. Okay, maybe three. Anyway, was in a regular one, and the stupid general with the bombs and the things, and the poor little hunter died. It was a squirrely group, for sure. Hunter says something like "Thanks a lot" and tank agrees I suck at heals, and I say to them, "It's not like I did that on purpose," and that's when tank proceeds to tell me I'm awful.

This is one thing, ONE THING, that seriously worries me: personal accountability. In life, and in game, if I screw up, I have always taken apart what is my role in the situation. Cross-dressing rogue and I were discussing in general, how long it takes society to catch up with technological "manners." I remember when e-mail first came out (yes, I am aging myself) and people had to be told not to write in ALL CAPs. There were reams of virtual business etiquette instructions on what not to do. (And yet, just last week, a young colleague sent an errant all-staff email that, well, should never have been sent.) We are still learning. We still step on toes, pinch fingers, have literal and figurative fender-benders.

We hurt each other.

Now, whether or not we do this intentionally, that's another detour for roads to hell and such.

Here's a tiny, teeny blessing:
May your number of hugs always outnumber your facepalms.

Email ThisBlogThis!Share to TwitterShare to FacebookShare to Pinterest
Labels: Then and Now