Maybe part of my ennui is largely due to dailies.

I don't know about those things sometimes. I understand the economics of dailies for Blizzard: they keep players on pace, in game, and paying subscription fees. Every moment or activity is carefully calculated by a room of goblin accountants, tracking away the silver and coppers. Time is money, friend, and don't you forget it.

But, okay, always look on the bright side of life, eh? While I'm trying to obtain the rays in Blade's Edge, these folks lurk around, the Wrath Corruptor. Their posture isn't very good, but you know something? What they're wearing is interesting: 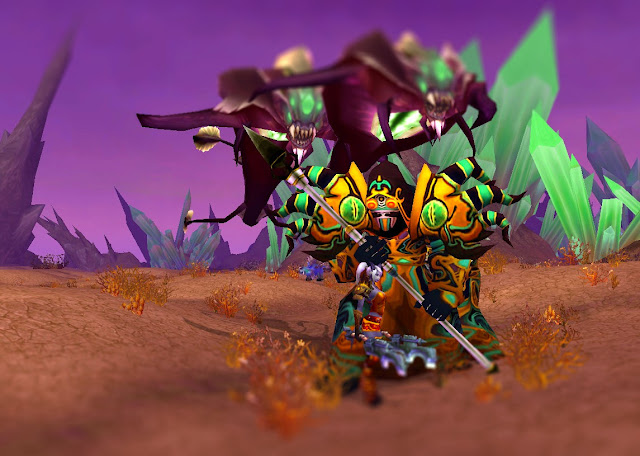 Maybe I'll ask Cyrme if she knows how one can put an ensemble similar to this one together. I suspect, because I know something about how big companies work, that a designer or two was put in charge of these NPCs and had free reign, but nowhere else do their models exist. Since transmogrification, I've noticed many similar looks, kind of a "Who Wears It Better?" thing:

Anyway, my fellow fashionistas, my question or challenge to you is, "What NPC looks have you seen that are not duplicated anywhere else, that you would love to knockoff*?" I know that Queen Azshara's looks are unparalled, so not necessarily the celebrities of Azeroth, but the rabble, such as these Corruptors?

*knockoff their outfits, not necessarily the NPC...
Posted by Matty at 6:34 AM